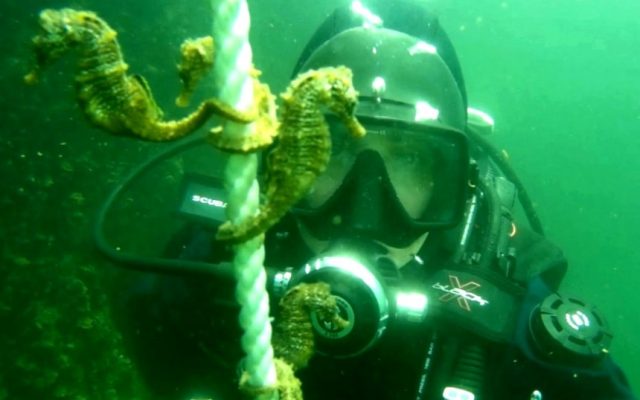 Pascale Roibu, a well-known Romanian diver, has taken some rare pictures of dozens of large seahorses clinging to an underwater rope in the Black Sea.

The military diver posted a film of the creatures on Facebook which he captured near the Black Sea port of Constanta.

Seahorses are in fact small marine fish and are shy creatures that are easily startled. This makes it difficult for underwater photographers to take photos of their faces,  making this film even more remarkable.

The images show the seahorses wrapping their curled tails around the rope, almost like underwater pole dancers.

They are poor swimmers and most likely to be found resting with their prehensile tail wound around a stationary object. In this case, it’s a thick rope.

The creatures have a head and neck which is suggestive of a horse. They have bony armor, an upright posture, and a long, curled tail.

They generally live in shallow tropical and temperate salt water and range in size between 8-18 cm.

The ones in the Black Sea can be yellow-greenish or brown-blackish. There have also been reported sightings of white spotted ones.

Pascale Roibu has written a number of books about his life and a diver and his discoveries. He also has come up with the idea of creating an underwater museum.

Seahorses are a protected species. There are about 50 different species which live in the Black Sea, mainly the common seahorse.