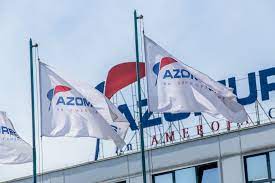 The prime minister spoke Monday together with coalition leaders at a press conference  to present a package of EU support measures for Romania.

He was asked whether Azomures would benefit from EU relief as production has been affected by high gas prices and sanctions imposed on Russia.

Romania imports about 20% of its gas from Russia’s Gazprom. Since the sanctions it has been trying to find other sources such as Azerbaijan.

Azomures suspended production during the winter due to high gas prices.

It announced plans to restart production last month after the European Commission said member states may grant aid to companies working in the field.

The European Commission said energy-intensive companies could benefit from state support to balance the costs of rising energy prices. Companies active in the fertilizer industry, which use natural gas as raw material, can receive up to 50 million euro in state aid.

„We have had discussions  with Azomures representatives. It is very important for us to restart the production of chemical fertilizers. They are ready when we find gas sources. We currently don’t have enough gas to ensure storage for the next winter,” he said.

Romania is in negotiations with Azerbaijan to buy liquefied gas and there are also discussions with Romanian gas producers,  Romgaz and Petrom.

Romania can potentially store up to 3.4 billion cubic meters of gas, the prime minister said.