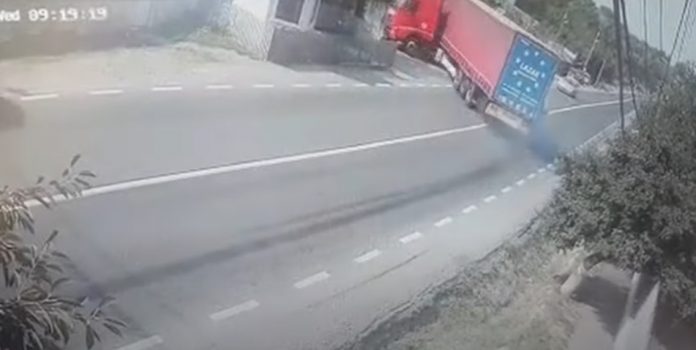 A Romanian truck driver who made the news after he narrowly avoided hitting a 90-year-old pedestrian who walked in front of his truck has won praise from police and ordinary people for his skilled driving.

CCTV cameras caught Georgian Dinu as he swerved his heavy truck sharply at an angle of 90 degrees to avoid the nonagenarian before he crashed into a wall News.ro reported.

The dramatic video of the Aug. 25 incident was posted on social media and news sites. Reporters interviewed the driver and the elderly lady. It has been viewed more than 67,000 times.

The woman was surprisingly surly and unappreciative even calling the driver ‘crazy.’ But strangers have reached out to the 37-year-old. He said he has received gifts and this week he was publicly praised by the  local traffic chief.

“I got a lot of positive messages,” he said. “One company gave me a professional camera for my truck, someone else offered me money for my son, and the company I worked for gave me a prize.”

The chief traffic cop in the region said the driver’s reflexes saved the woman’s life.

„I want to express our admiration and appreciation because we don’t come across this kind of example too often,” said Buzau county traffic police officer Silviu Dinu.

.“The way he managed to perform a maneuver in a small space and very short time saved someone’s life.”

He offered him a diploma and a symbolic prize “to remind him to always have this sharp awareness and this gesture he did on public roads.”

Mr Dinu, who has been driving for 18 years, described how he managed to avoid hitting the woman. In the process, he smashed his truck which will take six months to repair.

He said he had unloaded crates of beer at a warehouse in the Danube port of Galati and drove away. Five kilometers later, after two bends, he suddenly saw the woman coming out of a shop and crossing the road without looking.

“I was alert and I wasn’t going fast, so I veered sharply to the left and went into someone’s fence, destroying an electric pylon on the way,” he added.

“After that, I couldn’t find the elderly lady,” he added, News.ro reported.

The driver said it wasn’t the first time he had a near miss. A year ago, he almost plowed into a car driven by an elderly man.

„I was going from Buzău la Ploieşti. An 80-year-old man with three passengers drove out of a side street and I steered away. I clipped his car… but I think that if I had hit him from the side, what could have happened.”