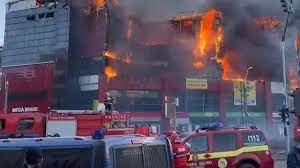 A fire ripped through a commercial center in Bucharest on Tuesday spewing flames and thick smoke into a densely populated area of the capital. Nobody was injured in the blaze.

Police evacuated shoppers and local residents after part of the roof of the Prosper shopping center fell on to the road in a busy area. Traffic was blocked for several hours as the blaze spread through the top floor of the building.

On Wednesday, authorities said that the building managers had been fined in 2018 and 2021 for violating fire safety rules.

After the fire broke out on, more than two dozen fire engines and eight ambulances raced to the scene. There were no immediate reports of  casualties.

High winds sent smoke billowing in the neighborhood, but meteorologists said the smoke would disperse later in the evening.

Witnesses told television stations that they heard a loud noise like an explosion before the fire broke out.

The head of Emergency Services Raed Arafat said that building was at risk of collapse, Antena 3 reported.

„The fire is under control but hasn’t been extinguished. The risk of spreading is close to zero,” he said.

He said the center had a metal structure and was at risk of collapsing.

The shopping center covers 1,200 meters and is located in a residential neighborhood.

An investigation is underway into the cause of the fire.