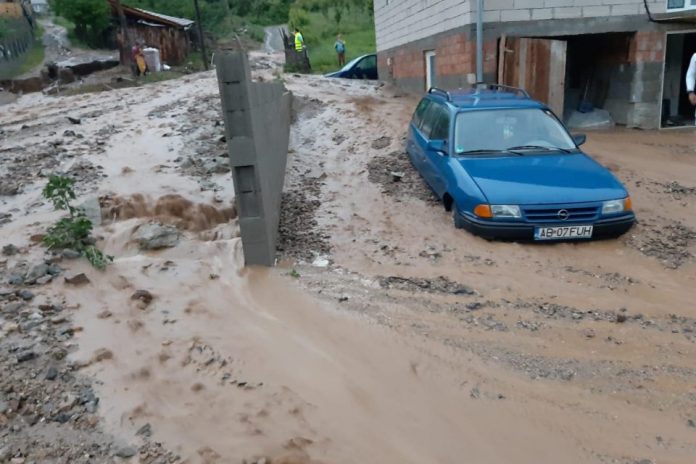 The National Meteorological Administration on Tuesday issued a fresh weather warning for three-fourths of the country and an amber warning until Wednesday evening for showers and atmospheric instability in 13 counties and the capital.

Torrential rain in the Botosani region, near the Ukrainian border and the body of 75-year-old woman was found after she was swept away by flash floods.

Flash floods in far north Romania overturned car on Monday and emergency workers were called to the rescue passengers and the driver. The road was blocked by the high waters.

There was severe flooding in the southern town of Oravita, after torrential rain, emergency authorities said. The water turned streets into rivers and dragged cars in its wake. Homes were flooded by the muddy flood waters.

Railway traffic was halted on a main line in central Romania  after the railway line near the town of Aiud was flooded. A number of trains were stranded at nearby stations and passengers were taken by car to other stations.

Weather authorities say they have issues 52 red weather warning this month, adding that heavy rains will continue until the first week of July.

There will be heavy rain, high winds, thunderstorms, and hailstones in eastern and southeastern Romania.

Prior to recent rain, Romania has been especially hit by drought, after the warmest winter in half a century was followed by the lowest rainfall in March and April in 30 years.

Anti-drought measures have been announced, including more irrigation projects.

But the rRecent torrential rain in eastern Romania have made the problem worse, with flash floods damaging crops already stricken by drought.

“We have not seen a drought such as this for more than 60 years,” Agriculture Minister Adrian Oros said, adding that more than 1.4 million hectares of arable land had been affected.