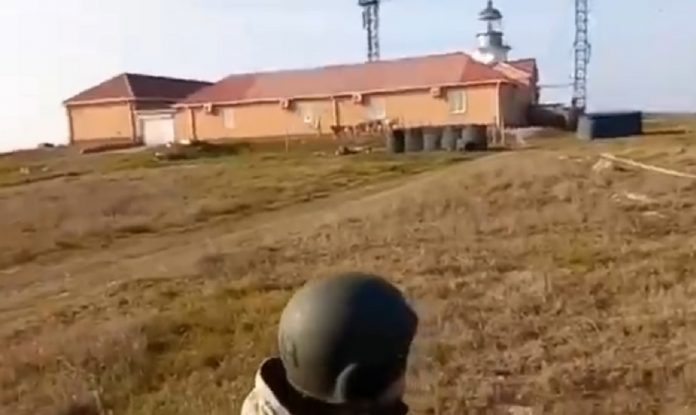 Ukrainian soldiers who died defending an island in the Black Sea from an air and sea bombardment reportedly told an officer on board a Russian navy warship to “go fuck yourself” when asked to surrender.

There were 13 border guards stationed on Snake Island, a 16-hectare rocky island owned by Ukraine that sits about 300 kilometers west of Crimea, when Russian troops bombed the island on Thursday.

The island is small but strategically important for the defense of Ukraine’s territorial waters.

All 13 soldiers died after refusing to surrender, Ukrainian officials said.

President Volodymyr Zelenskiy announced he would posthumously award all of the soldiers the Hero of Ukraine award.

“All border guards died heroically but did not give up,” he said.

Audio has emerged that claims to have captured an exchange between Ukrainian border guards on Snake Island and an approaching Russian navy vessel before the attack.

All of the conversations were in Russian.

“I am a Russian warship. I suggest you lay down your arms and surrender to avoid bloodshed and unnecessary victims, or you will be bombed,” the Russians said.

A male Ukrainian soldier is heard saying “So that’s it … Should I tell them to fuck themselves?”

The male soldier then says: “Warship, go fuck yourself.”

The Russian navy is reported to have bombarded the island with deck guns before sending soldiers on board to take control, according to Maritime Executive citing local media reports.

Snake Island , which is called Insula Serpilor in Romanian and Zmiinyi Island in Ukrainian lies off the Ukrainian and Romanian coasts on the Black Sea. For years, it was the subject of a territorial dispute between the two countries.

A marine research station is situated on the island. The maritime borders take in an area understood to be strategically important for resources including petroleum.

Putin, we have a problem