These are just some of the images that inspired Suzanne Shortt, a Canadian artist who moved to Romania this summer, and had an exhibition in Bucharest last month.

If some people wish they could be a fly on a wall, Shortt’s art is a bird eye’s view of groups or “constellations” of people from different cultures and the way they interact.

Shortt is a sort of human drone, faithfully capturing details, movements and space from an aerial vantage point.

She calls herself “a visual anthropologist” or “a voyeur” and uses photographs for her paintings.

The only artistic interpretation is the background, which she strips away and replaces with her own imagination.

“I get to have fun with the snow and the sea,” she says. “The flat, colorful background makes you focus on the humans,” Shortt told me one Saturday morning. “It’s human choreography. I want to zoom in on them.”

There is artistic purpose in removing the background. “If you take away the background, you allow the viewer to ask their own questions,” she says.

And what of her subjects?

“The German yoga practitioners are doing their own thing compared to the dog groomers,” from China which are more conformist,” she says.

Also exhibited was a canvas of middle-aged naked joggers running on a wet beach in Britain, which you see from a distance. She calls them  “wonderful British bottoms running toward the sea.”

“I love the idea, that it is just the moment. I only observe, the moment is here and the moment is gone,” she says. “You have (a level of) detachment.”

There’s an aerial view of visitors going to the Tate gallery that suggests detachment and little interaction or group conformity unlike the Chinese dog groomers. The vivid pink background initially draws you in, rather like the opening paragraph of a novel or the lead of a news story.

You are then captured by the tiny but detailed figures in the painting, a woman in ripped jeans, a man with a jacket slung over his shoulder, another man wearing a baseball cap. So tiny, but so real.

Shortt has another view about the visitors to the Tate. “People who came to see the art became the art.”

„I am referencing photos. I am breaking rules,” she adds. “People technically are not supposed to be walking off canvas,“ as they do in the Tate Modern vignette.

“It’s a cultural negotiation you go through, a visual processing of the stuff you don’t talk about, the non-verbal. The thing I am concentrating on is the position of the figures.”

The paintings are curiously impersonal and personal at the same time.

She believes viewers (including the writer) are “pulled in by the strong pink (background) and then they get inside the picture.”

The gallery said Shortt  “takes into possession the group dynamics, immortalized in the fixed stage. The observer is an intense voyeur, attracted by the familiarity of the games, but from a sufficient height so as to record every detail.”

Shortt studied art at Queen’s University, Kingston, Canada and computer animation and has since traveled around the world.

Talking about the way different cultures interact on the street, she described Istanbul where she lived with her husband Peter Welch who is now the director of the International American School of Bucharest. “How they move is different; they walk right into you.”

She also lived for a while in Finland where she had an exhibition and describes what it’s like moving from country to country, from culture to culture.

“You don’t know the language, and you watch people all the time and they became my subject matter.”

That’s the anthropological side, but the visual experiences include ice, water and snow and big open spaces.

“I don’t mess with (things), I put people exactly how they appear, I don’t want to pretend I know what it is and how it should be.”

“It takes me a year to internalize, to process where you are,” she says.

What strikes her about Romania?

Bucharest hasn’t made it on to canvas yet, but she mentions images of woman in brightly colored skirts tending municipal gardens and  “cleaning the streets, how they move through streets doing their work.”

“So many street cleaners, like a silent army, women with lawnmowers and full skirts”

“Outside Romania, it would look exotic,” she says. She’s also noticed the way ambulance drivers congregate outside hospitals.

“I want to see the anatomy of the aerial view, it’s a little bit anthropologist, I don’t want to have any interpretation.”

“It could be yoga, it could be beaches, and you look at it with a different lens.”

“People are doing their own work, but they are all together.”’ 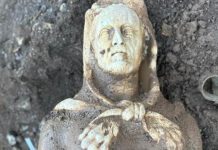