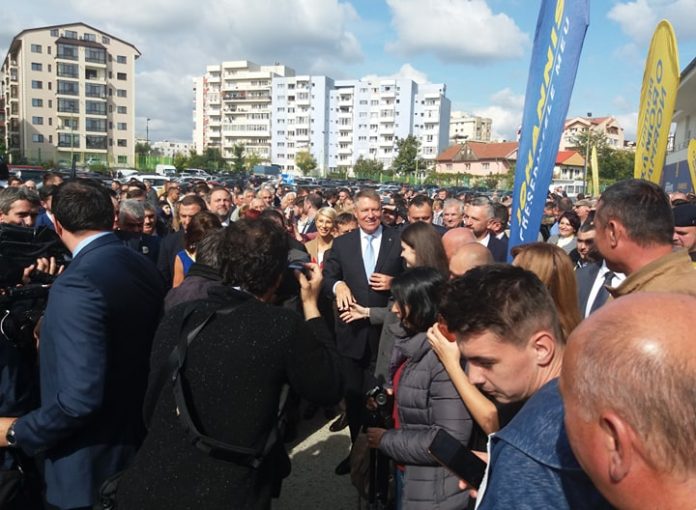 Millions of Romanians have voted Sunday in a presidential election which is likely to see the re-election of Klaus Iohannis who has been credited with helping to bring the country back to the European mainstream after attacks on the rule of law.

Iohannis, 60, who is supported by the center-right Liberal Party he used to lead, is set to win the most votes in the first round. But he is unlikely to get the majority needed to secure an outright win in the first round leading to a runoff on Nov. 24.

With two hours to go, turnout was 45 %, election authorities said.

Iohannis has vowed to continue strengthening the rule of law and to support anti-corruption measures.

„I voted for a normal Romania,” said Iohannis referring to his campaign slogan. „I really want a good future for Romania and I hope to get the confirmation from Romanians that very many Romanians want the same thing,” he said after he cast his ballot in a school in Bucharest.

The Social Democrats whom Iohannis opposes swept to power in late 2016 with more than 45% of the vote in parliamentary elections, and embarked on a contentious judicial overhaul which sparked the largest protest since the 1989 revolution.

Since then, Iohannis has regularly lambasted the Social Democrats and their efforts to weaken efforts to root out high-level corruption and attacks on the rule of law.

Grigore Posea, a 91-year-old retired university geography professor, said he had voted for Iohannis. „He has picked up and lot of experience and he’ll only get better,” he said. „He saved democracy. If he hadn’t intervened against the Social Democrats, they would have turned the country upside down.”

Prime Minister Ludovic Orban urged Romanians to vote early Sunday saying: “The president’s job is the most important as it gives direction, (he or she) represents Romania in the world, and fixes errors made by other institutions. (The president) sets the tone.”

Viorica Dancila, whose government was toppled by a no-confidence vote last month is running for the Social Democrats, Romania’s largest party. She needs to win a place in the runoff to ensure the party remains a major force in Romanian politics.

Dancila, Social Democrat leader, said she had voted “against austerity for a united Romania (one) where Romanians aren’t afraid they can’t afford medicine.” The party embarked on a contentious judicial overhaul in 2017 sparking the biggest protests since the end of communism and drawing criticism from the European Union and U.S.

„I voted for her because she’s a woman and she dresses decently,” said retiree Adriana, who worked in the Architectural Faculty, adding that the Social Democrats had hiked her pension from 1,200 lei to 1,500. „Iohannis has mean eyes. If he makes it through to the second round against a dog, I’ll vote for the dog.”

Dan Barna, of the urban intellectual group the Union to Save Romania, also has chance of getting into the runoff. His anti-corruption message has resonated with Romanians who live abroad. As the hours wore on, he claimed the difference between him and Dancila was down to „a few thousand votes.”

Actor-turned-politician Mircea Diaconu, who is supported by allies of the Social Democrats and some Liberals, may also be in with a chance.

About 18.2 million voters are eligible to cast their ballots Sunday for one of 14 candidates competing for the five-year presidential term. Voting started at 0700 and polls close at 2100.

Some 300,000 Romanians had already voted abroad after a new law that allows three days of voting. Parliament passed the law in July after thousands complained they were unable to vote in successive elections due to bad organization_ long lines and insufficient polling stations. The issue forced two foreign ministers to resign.