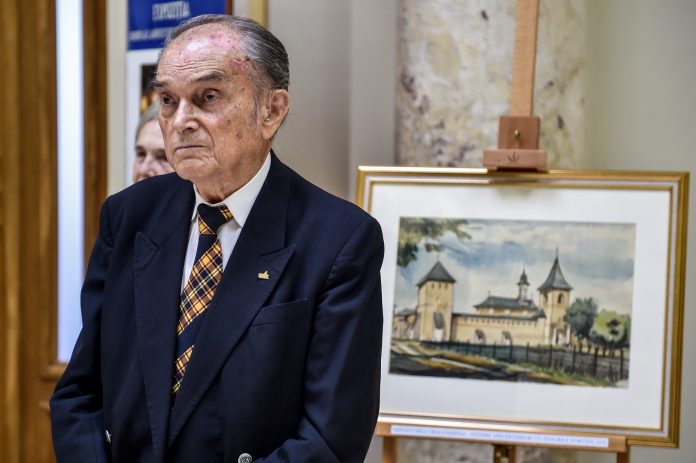 Romanian architect Gheorghe Leahu who designed Nicolae Ceausescu’s giant palace and his showpiece Unirea department store and also chronicled hardships of the communist regime at the same time, has died. He was 89.

He was one of many architects who worked on Ceausescu’s giant House of the People which has been described as a Stalinist wedding cake. It now serves as Romania’s parliament.

Houses, neighborhoods and churches were razed in the 1980s to make way for  the  meglomaniac project. People were evacuated from their homes at short notice.

The one-kilometer long avenue leading up to the palace was deliberately built a meter  wider than the Champs Elysees in Paris. It was lined with new apartments and fountains in a grandiose Socialist architectural style. Even as he was working on the project, Gheorghe Leahu kept a secret diary where he wrote about hardships suffered by Bucharesters who lined up in the middle of the night for meat, milk and sugar which was all rationed.

He described  fuel and heating shortages, two hours of television a day and the personality cult of Nicolae and Elena Ceaușescu, the Sighet Memorial said, announcing his death on Friday.

“His secret journal bears faithful testimony to his family life and Romanians’ lives, in the most degrading and humiliating period from 1985-1989,” it said.

Among his architectural achievements was the Unirea department store now called Unirea shopping center which opened in 1976. It is now a mini mall with international high street stores. In his spare time, he painted lyrical watercolors  of the city that he made his home.

He was born in Chisinau in 1932 into a family of priests and intellectuals  when it was part of Romania. His family fled to Romania in 1940 during World War II when Moldova was annexed to the Soviet Union under the terms of a Nazi-Soviet pact.

He studied architecture at the Ion Mincu Architecture Institute in Bucharest from 1951-1957 under teachers who studied in the interwar period and had a pro-European outlook, less influenced by the dominant Socialist doctrine.

He worked at the Bucharest Project Institute for 24 years until 1991 on  major urban planning projects of the era. He published a book of his watercolors in 2019. Most of the artwork was painted in the 1980s. “The Bucharest architectonic curiosities, by Gheorghe Leahu,” features paintings of the Dinu Lipatti music school, the Gara de Nord railway station, the Lutheran Church, the Palace Square, The Russian Church among others.

He later donated his works to the Bucharest Municipal Museum. He also wrote his memoirs “A life among houses and colors.”

Bucur Obor, Bucharest store that was a symbol of communism and the post-Ceausescu capitalist era, sold