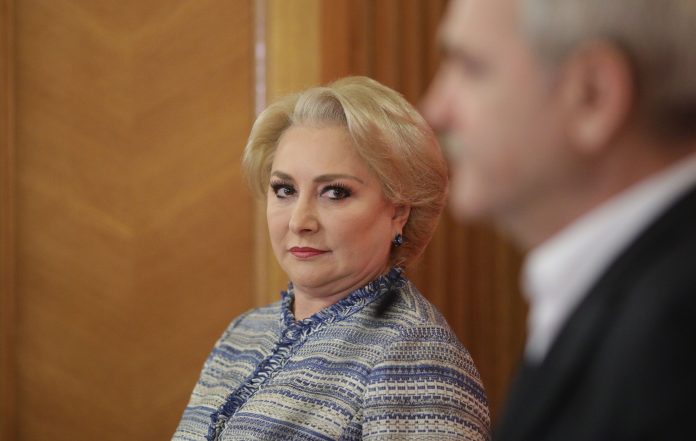 Romania’s Prime Minister Viorica Dancila was fighting for her political survival after Parliament voted to dismiss her government in a vote of no-confidence Thursday.

Some 238 lawmakers voted to fire the government, five more votes than needed. The outcome will hurt her chances to become president in November elections. After the vote, she called on President Klaus Iohannis to name a new prime minister „today if possible.” She vowed to fight on as the party’s candidate in the presidential race, and insisted she would make it through to the runoff.

As the result was read out, lawmakers applauded and cheered.

“The nightmare that Romania was living for the past three years is over,” said Liberal Party leader Ludovic Orban after the result was announced.  “An era of destruction, hate and division is over, and a period of construction and modernization can begin.”

„Today Romania won!” said President Klaus Iohannis. He said he would hold talks with political parties Friday morning because we are in „urgent need of a new government.”

Although Dancila struck a defiant tone, she will likely come under pressure to quit as party leader and even as presidential candidate.  It’s too late to elect another candidate and some party members may throw their weight behind actor Mircea Diaconu for the presidential race.

„The collapse of the Social Democratic government is the natural result of the whole society faced with the abuses committed by this government. This means the Social Democrats are history,” Iohannis said, urging Romanians to vote in upcoming presidential elections. „Romanians wanted the government to fall (they wanted) an end to amnesties and early parole to stop Romania moving away from the EU.”

Earlier, Dancila, who was formerly a European Parliament lawmaker, lashed out at politicians seeking to topple her government saying she was “more of a man” than all of them.

Dancila, 55, defended her 21-month tenure as the country’s first woman prime minister, and called her detractors “amateurs and irresponsible” people. Earlier, she vowed not to step down regardless of the vote.

She is the third prime minister from the ruling Social Democrats to be ousted in three years. The government can remain for a period of 45 days_ though with limited powers_ while President Klaus Iohannis holds talks with parties to find a government that Parliament needs to approve.

Some opposition politicians are pushing for early elections, something Romania has never had. Former Prime Minister Victor Ponta also says he wants to form a government with the Social Democrats without Dancila.

Political analyst Radu Magdin said the Liberals were the winners „in terms of political victory (as their main objective was to oust Dancila), ” adding that in the long run „they could face problems since other parties are very reluctant to join the Cabinet team.”

The Social Democrats who came to power in 2016 parliamentary elections lost their majority in Parliament and one month ahead of presidential elections and most parties united to try and topple the government.

In a sign of how tight the vote was,  the Social Democrats promised to hike wages and other incentives to public workers and has offered billions of lei to local authorities for infrastructure projects in a bid to stay in power.

Iohannis, who wants a Liberal-led government, blasted the Social Democrats for having “a government which is parallel with the needs for modernization of a European-type society in the 21st century.”

The Liberal Party initiated the motion saying the government had lost 6.4 billion euros of EU funds, hadn’t built highways, and had passed an early parole law which allowed violent detainees to walk free who then reoffended.

Ahead of the vote Dancila issued a threat to the party’s own lawmakers saying if they voted against the government: “They will come under heavy attack from ordinary people.  Nobody will forgive them if they betray the party today, the party that made them and brought them into Parliament.”

But Liberal Party lawmaker Raluca Turcan called her “an illegitimate premier” opposed by 6.5 million Romanians in European Parliamentary elections where the party finished second, halving its score from the 2016 ballot.

Ponta, who was also Social Democratic chairman until 2015, urged lawmakers to dismiss Dancila. “We have the duty to bury a dead person who inhabits Victory Palace (government offices) and is affecting all of us. If we don’t bury (her) then Romanians will bury” her.

Leader of the Save Romania Union, Dan Barna, called for early elections.
Parliamentary elections are slated for next fall, while an early vote is not a likely outcome as Romania has never held early elections.

Barna, who’s running for president next month, blasted the government for failing to build highways. He said since the Social Democrats came to power, it had only built 65 kilometres of highways.

He also criticized her for throwing the country’s foreign policy “back 50 years” referring to her statements in the U.S. this year that Romania would relocate its embassy in Israel to Jerusalem, breaking the position of the European Union and Romania’s president who is in charge of foreign policy.

Three lawmakers who signed the motion which was brought by the Liberal Party didn’t vote either because they were sick, or one Senator said, he would spend the day hunting because the “opposition failed to convince me.” Cristian Lungu, a lawmaker from the Popular Movement Party, was transported to Parliament from hospital to cast his vote.

Two major names with a vested interested in the outcome were absent from the debate:  Iohannis and Liviu Dragnea, the former Social Democrat leader who’s serving a 3 ½ year prison sentence for corruption. From his prison cell he urged lawmakers to support Dancila.