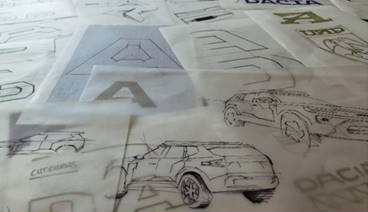 Dacia will be attending the Munich Motor Show with a world premiere seven-seater family car.

The newcomer in Dacia’s lineup is expected to replace both the Logan MCV wagon and the Lodgy van.

It may be the first model from the Romanian brand to carry the  new logo unveiled several weeks ago.

Dacias embellished with the revamped avatar will come off the production line in the second half of 2022.

The new family vehicle will be unveiled on September 3 before its appearance at the International Mobility show in Munich from September 6.

The new model hasn’t been baptized yet, but it’s  dubbed as a „versatile seven-seater family car.”

Dacia will have its entire portfolio on display in September at IAA. It will include the spruced-up Duster facelift and the Spring electric model.

Parent company Renault which will attend the show is expected to unveil the production version of its Megane E-Tech electric crossover.