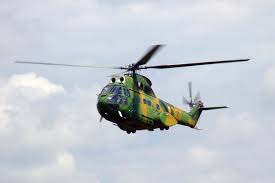 A Romanian helicopter sent on a search-and-rescue mission late Wednesday after a Romanian military Mig 21 LanceR dropped off the radar has crashed, killing all five soldiers  board,  the defense ministry said.

The pilot of the IAR 330-Puma helicopter had reported unfavorable weather conditions near the Black Sea and had been called back to base prior to the crash, Defense Ministry spokesman Constantin Spinu said.

It was snowing on Wednesday evening and 2C in the area where the crash occurred.

He said all five crew members died after the chopper crashed in a field near the village of Gura Dobrogea.

The ministry said the fate and location of the MIG plane was still unknown. It was on a patrol flight near the Black Sea when it went missing, authorities said.

If the plane has crashed, it will be the 20th crash of a MIG aircraft since 1994 according to official statistics.

Romania has an estimated two dozen MiG 21 LanceR  which are still in use, Hotnews said citing defense ministry officials.