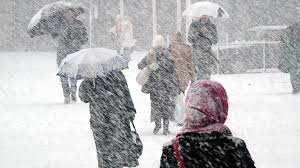 A cold snap hit Romania ahead of the weekend Friday with forecasters saying the polar weather would last well into next week.

Temperatures dipped below freezing in the capital early Friday evening with even colder weather predicted over the weekend until January 20. Snow is forecast across the country.

In Bucharest it will plunge to a low of minus 10 C on Sunday and in some areas temperatures will plummet to an icy minus 20 C, the National Weather Administration said, which is the coldest this winter.

„Saturday, Sunday, Monday and Tuesday… we will have the lowest temperatures… with temperatures falling to minus 20 C in the low-lying areas of east Transylvania and regions outside the Carpathians,”

„On the (Black Sea) cost it will be minus 7 C and in Bucharest minus 10 C,” meteorologist Elena Mateescu told Digi24 television station.

The wave of frigid weather began in the northwest and northeast and central regions and then spread to other parts of the country.

The coldest temperatures in the next few days will be felt in eastern Transylvania, in a low-lying depression in the county of Harghita, which is known as Arctic capital of Romania.

Daytime highs will be  subzero will generally hover around minus 8C in the city of Miercurea Ciuc, Romania’s coldest town. It will dip to minus 20C on Saturday night.

The frosty weather which comes after snow flurries in the south will lift on Wednesday, forecasters say.