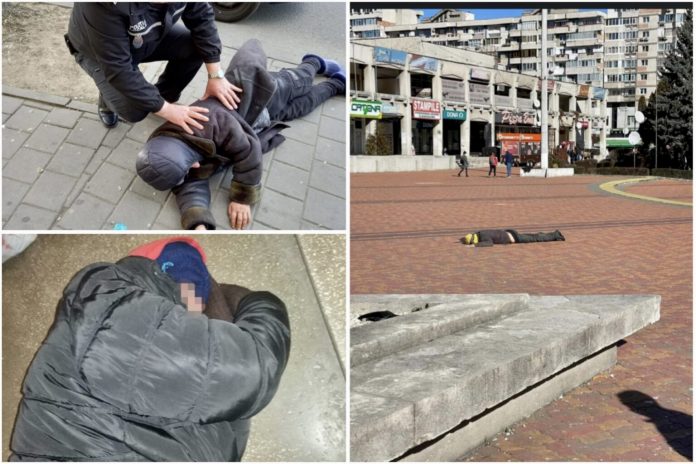 In the last two weeks, dozens of homeless people have collapsed or fainted in the  town of Pitesti authorities say.

Some have been transported to hospital for treatment, police say.

Police are calling it an “an odd phenomenon.” They helped one man they  spotted lying face down in the town center  ziarulargesul.ro reported on Sunday.

The most likely explanation is a drug that is circulating among the homeless community authorities believe.

Some of them have been spotted vomiting or urinating in the town center, an eyewitness said.

There are no figures for the number of homeless people in Pitesti, central Romania.

“You can’t let a child play in the town. There are homeless people being sick and relieving themselves right in front of the prefect’s office,” a woman who took children out for a walk told the publication.

“I called the police who said they were homeless people and there was nothing they could do.”

Many homeless people inhale glue and other substances to cope with the harsh realities of life on the street.

Most inhalants are cheap and easy for even children to access. Many are ordinary items readily available in supermarkets.

Some of the people who fell sick have been transported to hospital for treatment.

There have been calls for local authorities to investigate the case of the problem.

The government doesn’t have statistics on homeless people, but researches  estimate there are  15,000 homeless people in Romania. The capital, Bucharest, has around 6,000, including 1,000 children.

Many find warmth and shelter in Bucharest’s system of underground canals built for heating, water and sewage pipes.

Romania’s vast orphanage system was instituted during the time of Communist-era dictator Nicolae Ceausescu, who made abortions illegal.

During the early days of the post-communist period, conditions at the orphanages reached an all-time low. All necessities were in short supply, including food and proper care.

Many children ran away when they were old enough to manage on their own in the capital city.

More than 30 years after the revolution a new generation of homeless, drug-addicted youth have taken to the streets and found shelter underground.

There they live short, tragic lives, sometimes bearing children who more often than not, are taken into state custody like their parents before them.

Romanian woman, son and his wife throw themselves into river over homeless despair