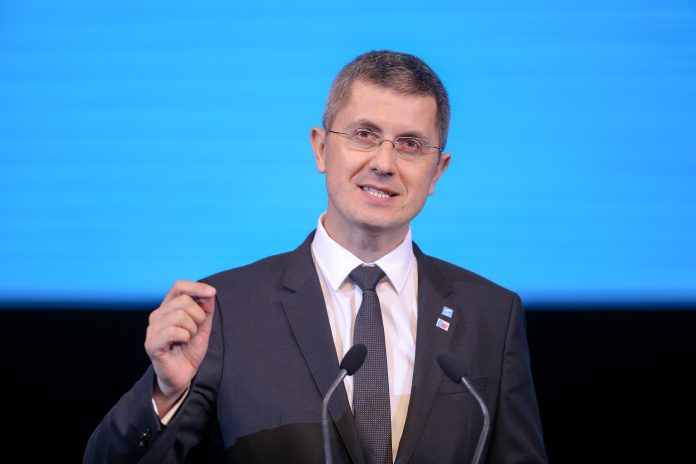 Dan Barna is running as the candidate who will reform and modernize Romania. His campaign poster shows a serious-looking man in his 40s who promises to make Romanians “happy” in their own country.

But investigative site Rise Project claims the message should read “tricked” in Romania.

Rise published an investigation on Tuesday about Barna who worked as a consultant for EU funds for 10 years and is now running for president.

It claimed that Barna, who says he wants to clean up Romania, had been linked to nepotism, false statements, allegations of fraud and conflict of interests in his pre-parliamentary career.

The “successful entrepreneur” had a long history of failures to the tune of 6 million euros, Rise reported.

Barna denied wrongdoing. He said any failures were “an inherent part” of any project that was just getting off the ground. It’s worth mentioning that Barna has not been investigated or charged with wrongdoing.

„It’s like accusing Hagi every time he doesn’t score a goal,” he said.

However, Rise pointed out discrepancies in what Barna publicly supports now and his previous career, claiming his campaign to bring Romanians back home contrasted with his previous job where he worked with Romanians who emigrated.

It asserted that Barna had initiated a campaign to ban individuals with a criminal record from Parliament (#FaraPenali roughly translated as #NoConvicts),  but as a consultant he oversaw allegations of “fraud and conflicts of interest with EU funds.”

Barna, 44, graduated Bucharest Polytechnic and trained as a lawyer before he became a consultant with EU funds after Romania joined the EU in 2007. He was elected to Parliament in 2016 when the Save Romania Union first entered Parliament.

Pre-empting the Rise Project story, which was advertised in advance as “The truth about Dan Barna,” the presidential candidate claimed to have successfully contributed to “dozens of projects” and had  helped non-governmental organizations and authorities to access funds.

Barna claimed he had “nothing to hide” and had a vast experience with European funds. “It’s an inherent and assumed risk in such cases, especially in the initial stage.”

He said he was co-opted by former Prime Minister Dacian Ciolos into the government due to his know-how, and in just six months, he managed to attract 7.2 billion euros in EU funding.

Rise singled out a project the Consultation Group for Development which was created to help people with disabilities or from disadvantaged areas find jobs. He earned millions under the pretext of doing good.”

It said three well-funded European projects “money evaporated between friends with invoices made on demand, nepotism, misuse of funds, fictitious payments, theft of equipment and speeches about the beauty of the entrepreneurial spirit. Unfortunately, for the beneficiaries, there was a lot of disappointment.”