Romania added almost 6,500 new Covid-19 cases on Thursday, the highest number for a single day as authorities warned of hard weeks ahead as they try to get the virus under control.

The Strategic Communication Group reported 6,481 cases after more than 36,000 tests were carried out.  A positivity rate of almost 18%, a rise from Wednesday.

Authorities said 83 people_ 52 men and 31 women_ succumbed to the virus in the past day, more than 20% fewer than Wednesday.

There were 868 patients being treated in intensive care units, slightly fewer than Wednesday.

Health Minister Nelu Tataru said Romania faced “three to four hard weeks” as it tried to get infections under control.

“We have 3-4 weeks where we will try to limit  the number of cases so we can reach a plateau,” he said during a visit to the Black Sea port of Constanta.

“In the current context where we are seeing cases rise all over Europe from one day to the next, in which we are seeing lockdowns and renewed restrictions, let’s all try and get the cases down.”

He also said Romania would increase testing capacity to  50,000 a day.

Eighteen more testing centers will be added to the existing 141, the minister said.

Prime Minister Ludovic Orban said the objective was to stop the rise in cases, and limit the impact on the economy. 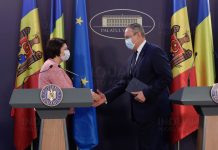