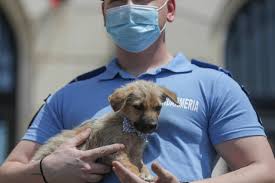 Romania is setting up an ‘animal police’ to protect animals that are mistreated or in distress, the interior minister said.

Under draft legislation, police can enter private property without a warrant to rescue an animal if there is sufficient evidence that it is in danger.

Interior Minister Marcel Vela said the draft, which is open to public debate for 10 days, “is awaited by all animal lovers.”

He thanked animal lovers for supporting the initiative which outlines when and how authorities can intervene to save an animal.

Under the draft, every county will have an animal police department he said Tuesday.

The measure aims to strengthen animal protection in the East European country, where there has been an outcry in recent years against instances of cruelty to dogs, horses and other animals.

Any animal that has been beaten, wounded or maltreated can be removed from its owners, the draft says.

Under the draft, local authorities will be obliged to provide public shelters, either by building them or having contracts with zoos or animal non-governmental organizations, Vela said.

Non-governmental organizations will be granted temporary custody of mistreated animals, as long as they can show they have the conditions to shelter and take care of them. Animals can also be offered for adoption,

Owners can contest decisions to remove an animal from their property. After the period of public debate ends, the draft will become law.