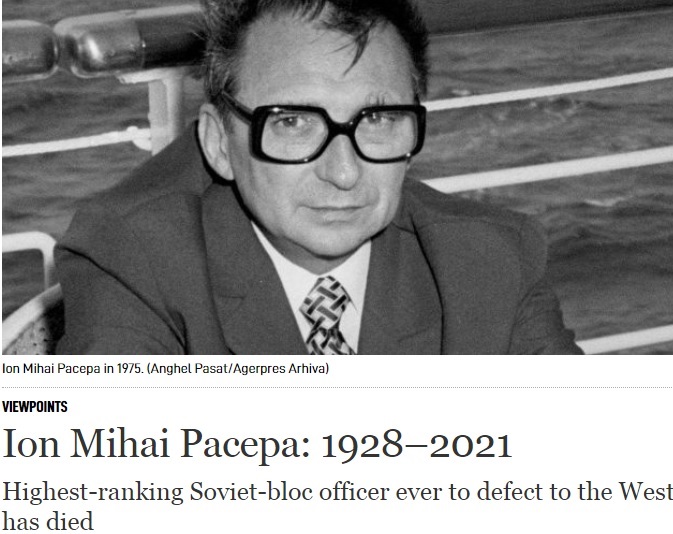 Romanian two-star Communist general, Ion Pacepa, reportedly the highest-ranking intelligence officer from the Soviet bloc to defect to the West has died, a colleague said. He was 92.

Ronald J. Rychlak who co-authored “Disinformation’ with the former Communist Lt. Gen. in 2013 said the Romanian died in the U.S. early Sunday of Covid-19,  Epoch Times reported on Monday.

Prized by Western intelligence, he was seen as a traitor by some in Romania even today, and an opportunist by others.

He was named head of the Romanian intelligence station in Frankfurt, West Germany, in 1957 before being appointed head of Romania’s new industrial espionage department, a position he held until he defected to the West in 1978.

During his role as a top spy for Communist Romania, he traveled the globe and met Communist leaders such as Nikita Khrushchev, Mao Zedong and Fidel Castro, as well as U.S. President Jimmy Carter.

However, in 1978 he walked into the U.S. embassy in Bonn with a letter from the Communist leader to Chancellor Helmut Schmidt and defected. He then came to the U.S. where he would spent the rest of his life, and warned the West about  oppression in the Eastern bloc.

He later explained his defection saying he’d been asked to organize the killing of Noel Bernard, director of Radio Free Europe’s Romanian program who had infuriated Ceausescu with his commentaries and he didn’t want to become „a political criminal.”

Ronald J. Rychlak wrote that President Carter didn’t believe Pacepa at first, and he wanted to return the defector to Romania, as Pacepa’s own disinformation had tricked the U.S. president into believing that Nicolae Ceausescu was a trustworthy ally, and now Pacepa presented a very different picture.

Eventually the CIA convinced Carter of his reliability and Western intelligence agencies tapped the information he provided.

The Communist leader was enraged by his defection and created a special Securitate unit charged with assassinating him. He also put two separate $1 million bounties on his head and dispatched the infamous assassin “Carlos the Jackal” to carry out the job, as well as a second team of assassins, which failed.

Even after Nicolae Ceausescu and his wife Elena were deposed and executed during the 1989 revolution, there were mixed sentiments about the two-star general.

Some Romanians said he had betrayed his country by uncovering the network of Romanian agents for what they said was a better life in the West.

His defection produced the dismantling of the Romanian service, as well as the identification of a number of KGB “sleepers,” intelligence agents operating without official cover or diplomatic immunity.

In the U.S, he lived under an assumed identity with his American-born wife, where he was known as ‘Mike,’ and even underwent plastic surgery, it was reported. It was unclear whether he ever visited Romania again.

However in his new role, he was an extraordinary asset to Western intelligence, providing a high-level insider’s view of the Soviet bloc mindset and modus operandi.

Most important was his explanation of the way Soviet agents planted disinformation to deceive and undermine faith in Western governments, leaders, history, and institutions—especially the churches. When he later obtained U.S. citizenship, the CIA gave him a letter thanking him for his “important and unique contribution to the United States.”

He eventually published memoirs from his nearly three decades as a spy =in the book “Red Horizons,” which lifted the curtain on the Ceausescu government and the communist bloc.

In 1999, Romania’s Supreme Court canceled Pacepa’s death sentences and ordered that his properties be returned to =him. In December 2004, the new government restored his rank of general.

Born in Bucharest in 1928, he studied industrial chemistry, but prior to graduation, he was recruited into the Securitate secret police. In 1955, he was transferred to Foreign Intelligence.

After coming to the United States, he continued to write books and articles under his real name, including the 2013 book, “Disinformation: Former Spy Chief Reveals Secret Strategies for Undermining Freedom, Attacking Religion, and Promoting Terrorism.”

He also noted that this type of disinformation was going on again today, with “fake news” and all kinds of stories (sometimes later retracted) that painted the United States in the worst possible light.

Christopher Monckton, a former advisor to former British Prime Minister Margaret Thatcher, called Lt. Gen. Ion Mihai Pacepa the “most influential man of the 20th century and, arguably, the beginning of the 21st.”

He leaves behind his wife of over 40 years and his daughter Dana.