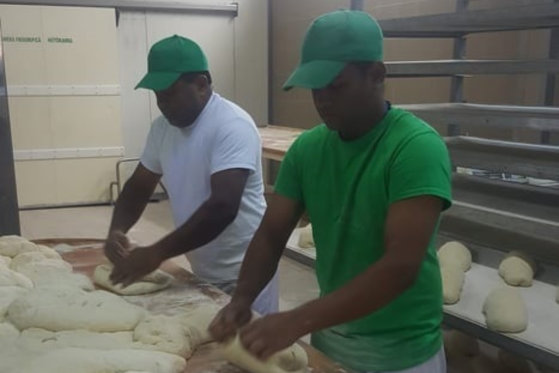 Hundreds of local residents in the town of Ditrau which has an ethnic Hungarian majority protested Wednesday demanding local authorities put an end to migration and call a referendum to stop “the flow of migrants,” radiocluj.ro reported.

Some 2,500 residents set up a Facebook page called „No migrants in Ditrau”( „Migráns mentes ditrot akarunk”) where some posted inflammatory messages about the two men, aged 22 and 49, and the owner of the bakery, Hungarian-language site Maszol.ro reported.

In rare share of unity, politicians from the ruling Liberal Party, the main opposition Social Democratic Party and another party on Thursday urged authorities “to take measures to stop the situation in Ditrau degenerating.”

However, there has been no comment from the dominant party in the region, the Union of Democratic Hungarians in Romania, a group that represents the interests of Romania’s 1.2 million ethnic Hungarians. Some 84% of the population of the county of Harghita where Ditrau is located are ethnic Hungarians.

Ditrau Mayor Elemer Puskas called for calm and said problems arose because local residents “read the media and see that the migrants are coming and what they are doing.” He appealed to locals working abroad to move back to the community.

Sebastian Buzila, the chairman of the Liberal Party in Harghita, said Romania needed to create a friendly business climate by investing in infrastructure and, education.

“We have a situation where a significant percentage of Romanian citizens of all ethnic groups emigrate for a better life, we can’t behave differently with foreign workers who’ve come to Romania,” he told the national news agency Agerpres.

“The lack of a labor force makes companies call on foreign workers,” he said.

The two men were recently hired through a local recruitment company, the bakery owner said, adding they were good employees. The owner of the apartment that they rented has been threatened according to reports and the men plan to look for accommodation in a nearby, bigger town. The bakery plans to hire five more employees from Nepal and Sri Lanka due to a labor shortage in the area.

The Social Democrats said they were “indignant” about the protests and it “inadmissible that in a EU state, the right to work isn’t respected and local residents who offer accommodation to workers are threatened.”

“We firmly condemn people who for different reasons incite hate and violence, trying to misinform public opinion,” said Romeo Tepes-Focsa in a statement.

Another political party, PLUS,  called on local authorities to “stop racist and xenophobic incidents and stop them spreading” adding “the solution is not to stop  an influx of legal workers but to develop the region by attracting investment so locals no longer go abroad to get a better job.”