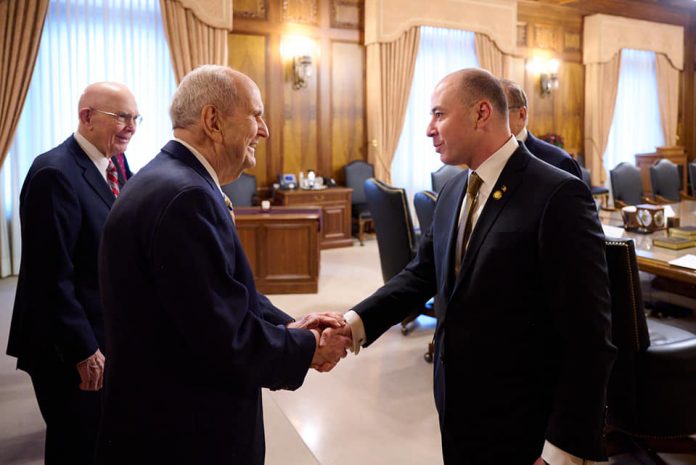 Romania’s ambassador to the U.S. has gone to the state of Utah to find help for a massive Ukraine refugee crisis the European country is facing.

Ambassador Andrei Muraru held a series of top-level meetings during a visit to the state this week to drum up support after almost half a million refugees who fled to Romania after Russia invaded Ukraine.

Besides government and business leaders, he met Russell M. Nelson, the 97-year-old president of The Church of Jesus Christ of Latter-day Saints. It was formerly called the Mormon Church.

„We talked about Romania’s humanitarian efforts for the Ukrainian refugees arriving in our country…. He sent a message of peace following Russia’s invasion,” the ambassador said in a social media post Friday.

„We are grateful that the Church – through its work in Romania in the last 30 years and its Romanian-American members – has helped build a bridge of friendship.” Mr Nelson visited Romania in 1987 during the communist regime.

Based in Utah, with its headquarters in Salt Lake City, it has over 17 million followers worldwide.

Mormons are known outside the community for polygamy, although officially Mormon church banned polygamy in 1890. Believers are banned from drinking alcohol and coffee.

One of its missions is to help people in need, regardless of nationality or religion. The church has a special department for this. .

In his meetings, Mr Muraru said Romania was making huge efforts to manage a massive influx of refugees and was seeking financial and technical assistance.

Some of the funds will be distributed in Romania, through non-governmental associations, a press release said.  Some Utah residents have said they want to go to Romania as volunteers to help in the humanitarian crisis.

The ambassador also had talks about providing local expertise in humanitarian crisis management.

The ambassador also had talks with Vice Governor Deidre Henderson and the Utah Senate President Stuart Adams during his two-day visit.

The visit was part of the “50 States, One Community” tour. He is meeting  Romanian communities in different states to learn of their concerns and opportunities for cooperation and investment.

Utah has a diversified economy with different industries such as tourism, mining, agriculture, manufacturing, IT, finance and oil production. It also has coal mining, cattle raising and salt production, according to a press statement.

Utah has highest population growth rate and a young population compared to other US states.