Russia has threatened  countries that send weapons and ‘mercenaries’ to Ukraine with ‘consequences.’

The warning was made by Russian Foreign Ministry spokeswoman Maria Zakharova, without explaining what measures could be taken in retaliation.

“Through its embassies, Moscow has notified numerous countries that they should bear responsibility for any experiments with military assistance to Ukraine, by sending weapons or volunteer fighters there,” she told Sputnik Radio.

She said the warnings had been effective. “Out-of-control rhetoric echoed by individual countries has become somewhat restrained,” she said, TASS reported.

She warned that mercenaries and sent to Ukraine „will return as hardcore combatants,” to Europe “similar to those from the Middle East flooding the EU for many years now.”

On Monday, the foreign ministry said that sending foreign weapons to Ukraine will lead to a „global collapse,” Interfax news agency reported.

Another Russian agency, TASS, quoted foreign ministry spokeswoman Maria Zakharova as saying that the West sending mercenaries and military equipment to Ukraine would cause a catastrophic development of the situation there.

Ukrainian President Volodymyr Zelensky made an unprecedented appeal for an “international legion” of foreign fighters to join the resistance which has already attracted volunteers. He said foreigners can come and „fight side by side with the Ukrainians against the Russian war criminals.”

He called Russia’s invasion  „the beginning of a war against Europe.” 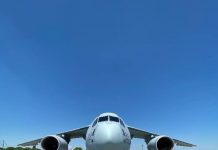 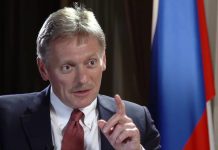