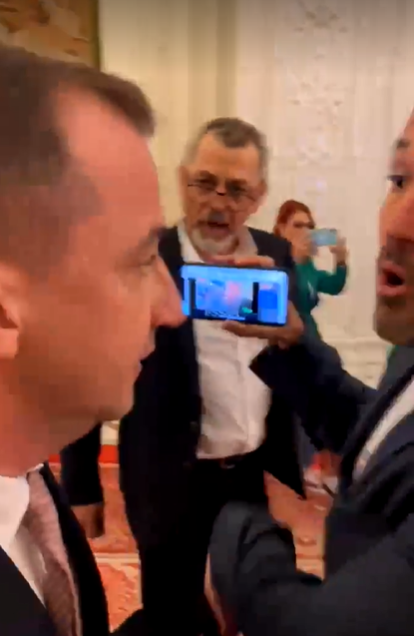 A showdown in Romania’s parliament over a controversial bill on  ‘national sovereignty’  dissipated into threats of physical abuse and swearing on Tuesday.

The fracas began after two lawmakers from the anti-establishment AUR party  became angry that legislation they had initiated had been rejected by lawmakers who once supported it.

They took issue with Alfred Simionis, a member of the Social Democratic Party which is part of the governing coalition and Romania’s largest party.

The furor erupted just outside the parliamentary chamber,  News.ro reported.  It was the latest incident involving members of the Alliance for the Union of all Romanians.

On Tuesday, the two AUR lawmakers demanded an explanation why a draft law that was designed to protect “the superior interest of the people and the Romanian citizen” had not passed.

Dumitru Focşa of AUR threatened to beat up Alfred Simionis accusing him of not being respectful.

”You dirty money changer,” he told the Social Democrat. “Your f%^* mother is a money changer, you pig,” Mr Simionis retorted. “Get lost!”

”I am a tax paying citizen and I pay your salary, you traitor. You traitors! The AUR lawmaker yelled. He admitted threatening to beat up Alfred Simonis. “Yes, I said I’d run him over. But as a politician he shouldn’t have brought my mother into it. My mother’s been dead for two years.”

The contentious bill had been initially supported by members of the Social Democracy Party, which is socially conservative. But in March, 13 Social Democrat lawmakers withdrew their signatures, making passage of the draft uncertain.

The law proposed making the president guilty of „high treason” in the event that he or she failed to apply constitutional court decisions within a certain time frame. It wanted to ban the export of timber and privatizing or selling shares of state-owned companies. It also proposed total freedom of comment on social media and to forbid minors from changing their gender.

The nationalist AUR party which came fourth in 2020 parliamentary elections.  It made headlines this year when it called the Holocaust “a minor subject.”