Six Romanians who were who were on the coronavirus-riddled Diamond Princess have landed in Romania on a rescue flight, the defense ministry said.

The six, who had asked to be repatriated, arrived at the Romanian Air Force base in Bucharest on a defense ministry plane after spending more than two weeks trapped on the doomed vessel in Japan.

Romanian officials in hazmat suits and face masks waited at the airfield to meet the Romanians.

They will now be quarantined in Bucharest in a secret location for 14 days, the health ministry said.

Four of the group were crew members on the Diamond Princess and the other two passengers. Two Romanians who tested positive for the virus are being treated in hospitals in Japan. Another nine Romanians are believed to still be aboard the cruise ship.

All six passed screening tests for the virus after they left the left the ship which has been docked off the coast of Yokohama since February 3.

More than 76,000 cases of coronavirus have been recorded worldwide, including at least 630 on the Diamond Princess.

Almost 2,250 patients have died, two of whom were elderly Japanese passengers on the ship.

The Romanians boarded an evacuation flight fom Japan and arrived in Germany and were then transported with a defense ministry C-27J Spartan plane which is designed for medical evacuations and has a special isolation room, the ministry said. 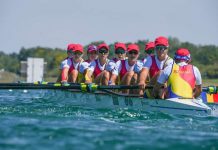