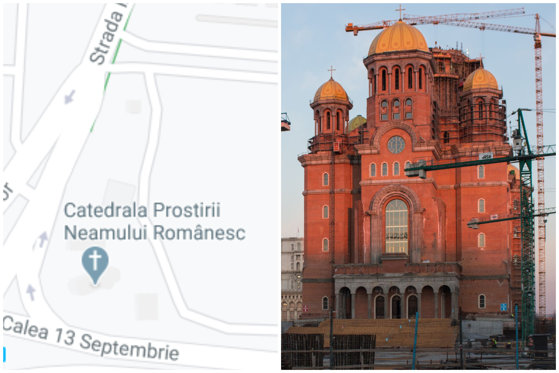 A slur on Romania’s biggest Orthodox cathedral has landed Google Romania with a fine.

The country’s anti-discrimination watchdog fined Google 10,000 lei on Wednesday for discrimination and denying the church the right to dignity after the People’s Salvation Cathedral appeared as the Cathedral to Fool the People on Google maps in early May.

It was not changed for several days, prompting an angry reaction from the Romanian Orthodox Church.

„The Christophobia of those who sneakily renamed a building which the Orthodox Church with the natural support of the Romanian State has built in memory of all the heroes in the history of this Christian country is another sign of the dangerous moral pathology which has already done a lot of harm to Europe and the world that Christianity has civilized over two millennia,” Orthodox Church spokesman Vasile Banescu said at the time

The building of the giant cathedral, the tallest Orthodox cathedral in the world, was met by criticism that public funding for the project could be better used to pay for hospitals and schools.

At the inauguration in 2018, thousands turned out to see the cathedral blessed, but the event was marred after three people were hospitalized when scuffles broke out between riot police and Orthodox believers.

The Anti-Discrimination Council ordered Google Romania to publish its ruling on the front page of the Romanian Google sit for ten days.

„We thank everyone who took an attitude against an intolerable abuse, an offense to the church and more specifically the National Cathedral,” said Banescu on Wednesday after the ruling..

It also recommended that Google Bucharest inform the shareholders about similar situations, in the future, translate the code of conduct into Romanian.

Following the ruling, Google said whenever there was a problem with Google maps „we act to correct the error as quickly as possible. The error was eliminated promptly in this case.”

Construction of the cathedral began in 2010 and is scheduled to be completed in 2024.