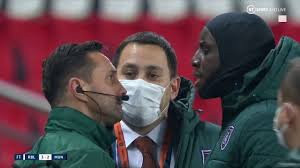 Relations between Hungary and Romania are often tetchy, but one Hungarian newspaper has come to the defense of a Romanian football referee who is facing allegations of racism.

Magyar Nemzet, which is closely aligned with Premier Viktor Orban, published an op-ed saying that the barrage of criticism directed at Sebastian Coltescu was a result of Western prejudice against East Europeans.

It’s a view shared by many ordinary Romanians who say that the referee was unfairly treated.

Mr. Coltescu was accused of racism after he identified an assistant coach from Istanbul Basaksehir as “black” sparking an international controversy.

The players walked off the field about 14 minutes into the Champions League game between Paris Saint-Germain and Basaksehir and the match was postponed.

It was played on Wednesday and players wore ‘No to racism’ t-shirts before their rescheduled Champions League game.

UEFA has announced that it will conduct an “in-depth” investigation into the incident.

Sebastian Coltescu has apologized and said he didn’t intend for his comment to be racist.

Many Romanians have defended him on social media saying he used the word ‘black’ and not a racist epithet.

They accuse Westerners of using double standards and not reacting when Romanians are called „Roma” or „Gypsies” as a pejorative term.

In Hungary, the incident struck a chord with the publication which is in the camp of the anti-migrant nationalist government.

It was headlined “Je suis roman.” “Black. In Romanian this means black. No more, no less. When he said this word, Sebastian Coltescu did not think that his career would end.”

The writer then says he believes the referee is a victim of discrimination against East Europeans.

The referee also won support from the Alliance for Romanians Unity, an unknown far-right party that shocked Romania by coming from fourth in elections last weekend defended the Romanian official.

„We support fairness on the sports field, not the intolerance generated by political correctness. Today it is Sebastian Coltescu, tomorrow it can be any of us.

“We are in solidarity with Sebastian Coltescu, the victim of an aggressive smear campaign at the national and international level,” said AUR co-president George Simion.