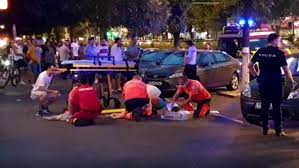 Two-year-old twins have fallen to their death out of window on the 10th floor apparently as their mother was doing a “Facebook live.”

The tragedy happened on Wednesday evening in the city of Ploiesti, in southern Romania, News.ro reported.

Prahova county police sat they has received an emergency call saying that a a two-year-old boy and girl had tumbled from a window on the tenth floor of an apartment building.

The toddlers were taken by ambulance to hospital but could not be saved.

Their mother was doing a “Facebook live” when the tragedy happened, News.ro reported.

She was smoking and listening to  Romanian pop folk music tunes, known as manele, next to her five-year-old son.

Her live feed was interrupted by someone knocking on the door. “Who’s banging like that?” she apparently said.

Her live feed lasted for 3 ½ minutes during which time she lit a cigarette. The feed ends when she hears the banging on the door.

Judicial sources say they are investigating whether the twins fell when she started the live feed.

The case is not being treated as suspicious.

The woman has been hospitalized in the Psychiatry Department of the Ploiesti Emergency Hospital.