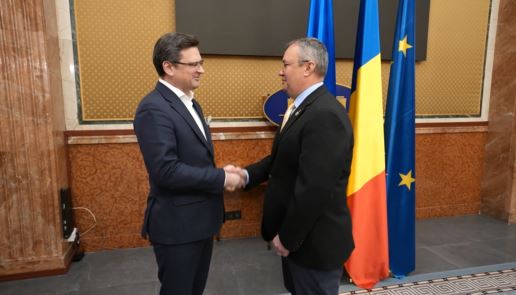 During a one-day visit to the Romanian capital, Ukraine’s top diplomat repeated the line he has used in other European capitals. “The best way to defeat Putin is to give Ukraine what it needs.”

He told reporters that he had brought up the issue of arms during talks with Prime Minister Nicolae Ciuca and Foreign Minister Bogdan Aurescu.

Asked directly whether the government had agreed to help Kyiv with hardware, he merely said: “We distributed a list of what we need to NATO and EU members and each country should decide.”

„I brought this up today and I appreciated the constructive approach. But every country must decide if they can deliver certain weapons. We are putting on diplomatic pressure and then public pressure which is not the case with Romania.”

“We don’t accept hypocrisy which isn’t the case with Romania. (The meetings) were friendly and open, he said.

Asked a second time whether Romania had shipped arms to Ukraine, the minister refused to be drawn.

„Guns and money need discretion. We won’t say what we’ve received and from whom except if it’s a public announcement.”

“Romania is smart. I leave you to work out the rest.”

For his part, Romania’s Foreign Minister Bogdan Aurescu said: “It’s not a good idea to talk about these things too much,” he told reporters.

„Romania is a EU and NATO state and extremely responsible. It fulfills all its international obligations in supporting Ukraine in everything.”

VIDEO | Bear trio rescued in Bulgaria released back into the wild after a...