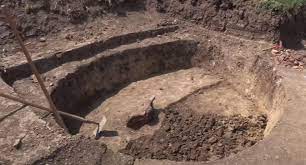 Transylvania is associated with the fictional Dracula, vampires and death.

Now, archaeologists have unearthed evidence that people lived (and died) in the region which is in northwest Romania 6,000 years ago.

„The more we find out about them, the more we know about us,” Paul Pupeză, an archaeologist at the Transylvania National History Museum, said.

The discovery happened when an area land was being cleared for an industrial building in Iclod, a place near the city of Cluj, gherlaininfo.ro reported.

„We are the first people to touch these fragments in thousands of years,” the archaeologist said.

The building works were halted, and the area was transformed into an archeological site at the beginning of July.

Archeologists, museologists and workers dug the an area covering about one hectare.

After stripping off the top layer of soil, archaeologists found there had been two settlements in the area.

The oldest one was a Neolithic site, 6,000 years old next to a Celtic sire which dated back about 2,200 years.

Mr. Pupeză said that in the past, houses were fortified with wooden walls. The wealthiest inhabitants lived in areas which had the best fortifications.

He said that at least three wooden wall rings had been dug up on the site in Iclod.

„The objects will be taken to teh museum and analyzed, restored… and in some cases exhibited,” he said.

The digging started in early July and is expected to end soon, he said.

Archeologists also unearthed graves are thought to be at least 6,000 years old. That was the period when the first clay vessels and stone tools appeared.

Human skeletons were discovered, with vessels on their heads or feet. According to tradition, the vessels were offerings that were made so that the deceased person could use them in the afterlife.

Researchers also found traces of a Celtic settlement from the Iron Age. The Celts lived in the area during the Dacian period, 2000-2200 years ago.

Remnants of a cemetery where people were incinerated was also found.

Unlike the Stone Age inhabitants, the Celts burned the bodies of the dead and put the remains in urns. They were buried in the ground along with vessels where offerings were placed, iron fragments.