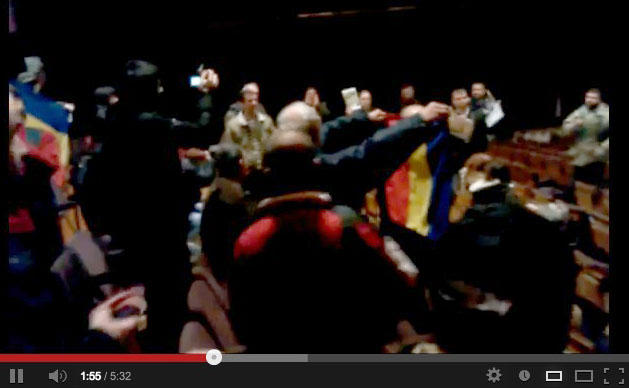 The European Court of Human Rights ruled on Tuesday ruled that Romania failed  to protect individuals from discrimination after far-right homophobes stormed an LGBT film screening in Bucharest.

The court concluded in its ruling that Romanian “authorities … discriminated against the applicants on the grounds of their sexual orientation.”

The Strasbourg-based court also ruled that Romania failed to uphold the right to respect for private and family life. It also failed to guarantee the right to freedom of assembly and association, which are all protected by the European Convention of Human Rights.

The 2013 screening of the film about a gay family “The Kids are Alright” was part of LGBT month. A protest against event was held by extremist groups near the Museum of the Romanian Peasant where the film was screened.

Despite police presence, dozens of protesters allied to the far-right party Noua Dreapta stormed the cinema. They threatened viewers by shouting homophobic slogans and hurling insults at them. At the time of the attack, there were about 20 people in the audience.

Party supporters yelled remarks such as “death to homosexuals”, “faggots” or “you filth” according to the court.

The court found that police failed to “protect the individual applicants’ dignity against homophobic attacks by a third party.

Members of Noua Dreapta, founded in 2000, have customarily protested against the Bucharest Pride parade every year. The party is considered a marginal group which has never held seats in Parliament.

Romanian prosecutors terminated their investigation into the incident in 2014 and described it as “an exchange of views”.

LGBTI rights group ACCEPT and five people who attended the screening took the case to the European Court of Human Rights.

The Strasbourg court ordered the Romanian state “to pay 7,500 euros to the applicant association and 9,750 to each individual applicant”.

The 3,264 euros spent by the applicants to bring the legal proceedings must also be covered by Romania, the judges said in the verdict.

78% of Americans find their country heading in the wrong direction