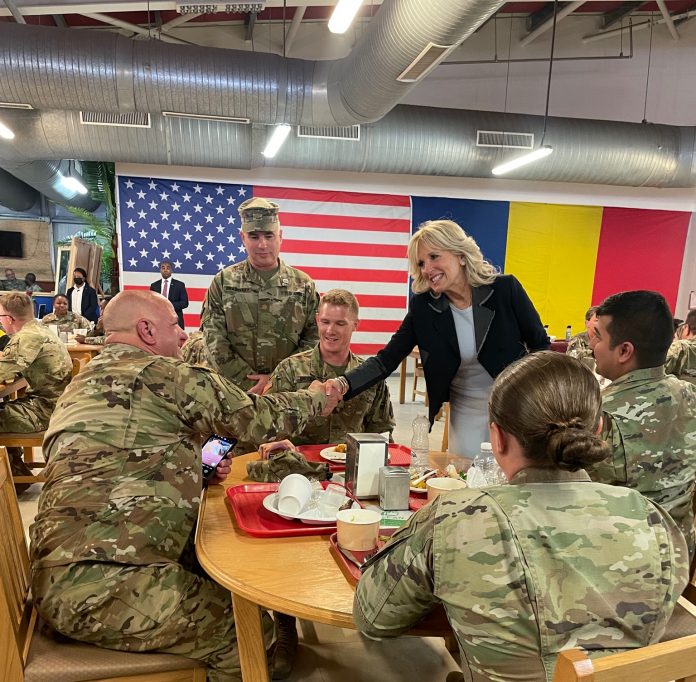 First lady Jill Biden arrived in Romania on Friday for the first stop on her four-day trip to Eastern Europe, where she will meet with government leaders, U.S. troops and refugees who have fled Ukraine since Russia launched its invasion more than two months ago.

Mrs Biden began her visit at the Mihail Kogalniceanu air base on, the Black Sea. She greeted  U.S. and NATO military officials.

The visit _ her second ever solo trip_  is meant to reaffirm U.S. commitment to its allies on NATO’s eastern flank as Russia continues its war in Ukraine.

The first lady will visit the U.S. Embassy in Bucharest for a humanitarian briefing from United Nations agencies, humanitarian groups and the Romanian government on Saturday.

She will then meet Romania’s first lady, Carmen Iohannis, who  like Jill Biden continues to  teach English in her home town of Sibiu while her husband serves as the head of state.

She will travel to Kosice, Slovakia, on Sunday to celebrate Mother’s Day with mothers and children before visiting the Slovakia-Ukraine border crossing in Vysne Nemecke, the Washington Post reported.

She will tour refugee processing centers and meet with aid workers and refugees.

Her trip ends on Monday  when she will meet Slovakian President Zuzana Caputova.

For the Romanian part of her trip, she is accompanied by Mark Gitenstein, the ambassador to the European Union who served as a former U.S. ambassador to Romania.

In recent weeks, a number of top U.S. officials, including Secretary of State Tony Blinken, Secretary of Defense Lloyd Austin and House Speaker Nancy Pelosi have traveled to Kyiv to meet with Ukrainian President Volodymyr Zelensky.