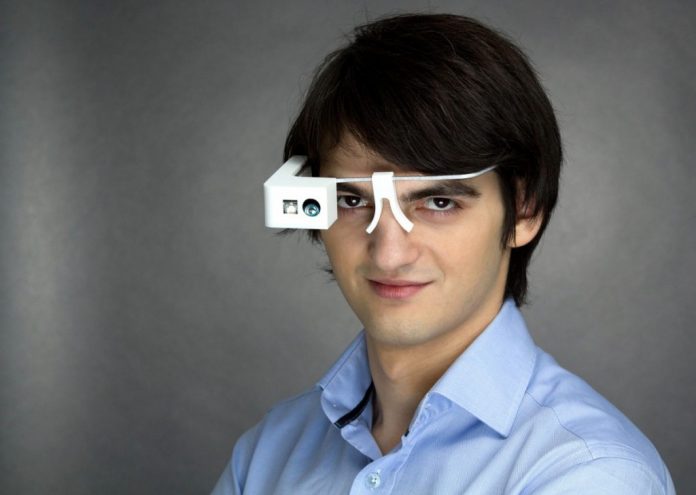 Cornel Amariei developed a device that mimics the benefits of a guide dog, providing the sight-impaired with up to 30 percent of the visual understanding of a non-impaired person.

The invention allows individuals to gauge distances, like how far away furniture and other objects are, which may also enable sight-impaired users to drive a car.

“There are over 40 million blind individuals worldwide today, and expected to surpass 100 million by 2050,” Mr Amariei, who is the CEO and co-founder of .lumen (dotLumen) told Global Business Hall of Fame.

For thousands of years, their only mobility aids have been guide dogs and walking canes, he said.

“The guide is unanimously seen as a good solution, but it comes with a few disadvantages,” such a training which can cost up to $60,000, and blind people can’t take care of guide dogs on their own easily.

“Because of this, there are only 20,000 guide dogs to 40 million blind people. We considered it is a fundamental need to develop a solution for the other 39,980,000 blind individuals who can’t benefit from a guide dog”,  he added.

He is one of five finalists in the 2021 Innovator section of the Global Business Hall of Fame.

The product will begin production in the second half of 2021, and by 2022 is expected to surpass the number of guide dogs in operation.

The 27-year-old from Bucharest was born in a family where both of his parents have locomotive handicap, severely limiting their mobility and his sister has cerebral palsy. Growing up in such an environment made him realize the impact disabilities bring on people.

DotLumen started as a research project at the end of 2018, and transformed into a startup at the beginning of 2020.

Tests have been performed with over 200 blind individuals from Romania and abroad. More than 2,000 tests are to be completed  in the first few months of 2021.

The.lumen glasses mimic the premiere features of a guide dog, in a different format:

It was founded by Cornel Amariei and Gabriel Chindris, a university professor in electronics and Mihai Ivascu, CEO & Founder of M3 Holdings.

Mr Amariei  was previously known for operating as a Head of Innovation in a large Automotive company and as a nominee in the first Forbes 30 under 30 Europe list.

He was the first Romanian to ever obtain the prestigious Ten Outstanding Young Persons of the World award by Junior Chamber International, previously obtained by personalities such as JFK and Elvis Presley.

The Global Business Hall of Fame inducts nominees who are working toward the Global Goals for Sustainable Development and “ have the power to be a force for global good,” the site says.