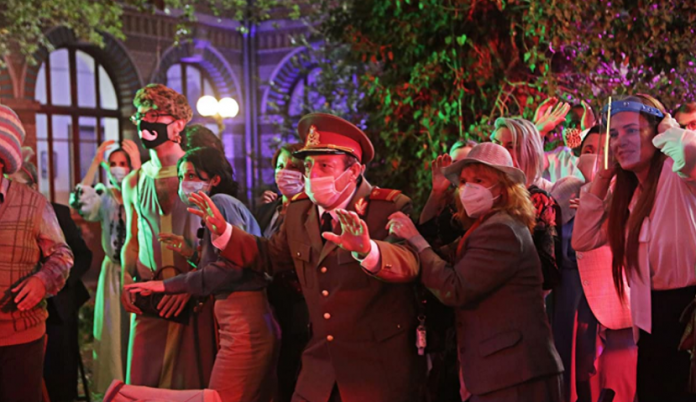 The movie is a social satire and stars Katia Pascariu as a school teacher who finds her career and reputation on the line after a personal sex tape is leaked onto the Internet.

The production was shot in Romania over the summer of 2020 during the pandemic and almost every character is wearing a mask. The executive producer is Romanian Ada Solomon.

“The Golden Bear goes to a film which has that rare and essential quality of a lasting art work. It captures on screen the very content and essence, the mind and body, the values and the raw flesh of our present moment in time.”

“It also challenges this present moment in cinema, shaking, with the same camera movement, our social and our cinematic conventions…. It attacks the spectator, evokes disagreement, but leaves no one with a safety distance,” was the jury’s argument for the award announced Friday.

“It is overwhelming I don’t have a reaction,” Radu Jude, 43, said after learning he’d won the top prize.

Berlinale states that: “Always up for innovative cinematic experiments, Radu Jude has crafted from this constellation an intelligent, satirical triptych: with its nonchalantly precise camerawork and manic humor found in the stress of everyday life on Bucharest’s streets, the first part shows us what contemporary cinema at the documentary-fiction interface can look like.

“Filmmakers or some filmmakers like me are not sure of themselves…. I am always full of doubts. …when something like this happens,  when a film is selected in a festival like Berlin… you lose some of the doubts, they again appear later.

“For a while it is like  a honeymoon with your own self-doubts,” he said.

In a review in Deadline, Anna Smith called it a “scathing indictment on modern-day Romania” that also provides “dark laughs around every corner.”

Producer Ada Solomon said she felt filmmakers from smaller territories were better positioned to deal with the new circumstances caused by the pandemic.

“We were more prepared for the challenge because we have always been in situations that are almost-crises. We always had to adapt and find unconventional solutions, because not having a proper system and not functioning in a constructive and settled way of making films, we always have to be very creative,” she was quoted as saying by Screen Daily as saying.