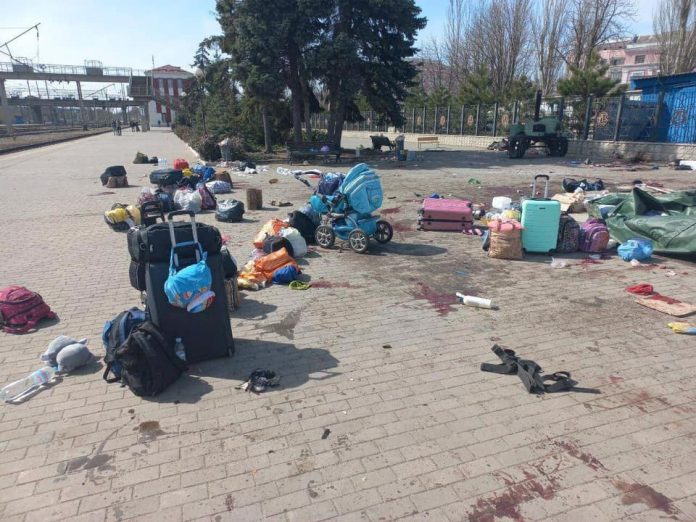 Russia may have committed another war crime by targeting civilians fleeing from an eastern Ukraine railway station with precision missiles, Britain’s defense secretary said Friday during a visit to Romania.

Ben Wallace vowed to “do everything” to ensure Russian President Vladimir Putin fails in  Ukraine. He predicted the war would backfire for the Russian president, suggesting other nations may want to join the NATO defense alliance.

With Russia’s invasion of Ukraine in its 45th day, Britain’s Royal Air Force on Friday took command of NATO’s enhanced Air Policing at a base in eastern Romania  on the alliance’s eastern flank.

Mr Wallace joined the Romanian Defense Minister Vasile Dincu a day after Russia was expelled from the UN Human Rights Council over reports of „gross and systematic violations and abuses of human rights” in Ukraine.

Some 30 people were killed on Friday in in an attack on the crowded Kramatorsk station that was an evacuation point for civilians, Ukrainian President Volodymyr Zelensky said.

He said a further 100 people were injured, as he blamed Russia for “an evil without limits.” The Kremlin denied targeting the station.

„Russia’s illegal, unprovoked and barbaric war must fail,” said Awasir Chief Marshal Sir Michael Wigston in Romania. ” We are willing to do what our governments ask. The Airforces are on the front line of NATO’s defense.”

„Our Air Forces are on the front line, they are the first line of defense,” Sir Wigston said at a handover ceremony at the Mihail Kogalniceanu Air Base.

Deputy Italian Defense Minister Giorgio Mule attended the event called the NATO Certification Ceremony which saw the UK’s RAF take over from Italy at the base.

A U.S. F-16 from Fetesti Air Base joined a Romanian MiG, UK Typhoon, and an Italian Eurofighter at the base in a formation underscoring the Alliance’s cohesion and collective defense.