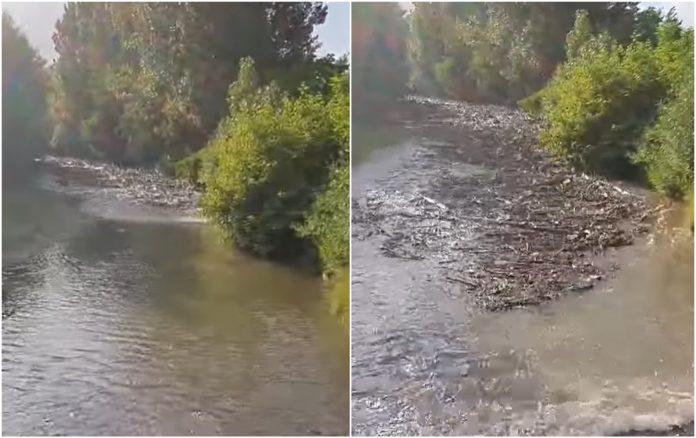 It is a deceptively tranquil scene.

The video shows a gurgling river fringed by green trees and bushes, swaying in a gentle breeze. Clouds scud across the sky. Birdsong fills the air.

It looks like a perfect day in early summer somewhere in western Romania.

Then suddenly, less than 30 seconds into the ‘nature film’,  a torrent of waste and wood debris looms on the horizon.

It flows quickly downstream until it fills the whole river. The huge mass of wood and waste continues to flow for another minute.

Local resident Dorel Lazar who filmed the scene can be heard saying “just unbelievable” as the trash spoils the picturesque view.

The garbage and wood appear to have been either thrown into the Geoagiu River in Alba county or pulled in.

Weeks of wet weather have swelled the river and pulled in the plastic and bits of trees and other rubbish into the water.

Waste dumping has become a major headache for Romania in the past two years.

Unauthorized waste dumps are scattered throughout the country.

Border police say they have discovered more than 3,600 tons of waste that has been exported to Romania this year mainly from Western Europe.

Most of it is shipped to the Black Sea port of Constanta.

Last weekend, Romanian border police impounded more than 100,000 kilograms of te0xtiles, plastic, cardboard and second-hand clothes on the trucks which drivers didn’t  have transport documents for.