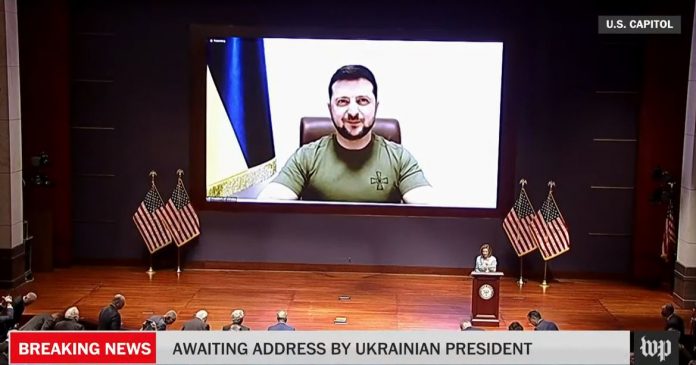 Ukrainian President Volodymyr Zelensky made explicit reference to the Holocaust in an address to German lawmakers Thursday.

“Every year politicians say never again. Now I see that these words are worthless. In Europe a people is being destroyed,” he told lawmakers via a video address at the Bundestag.

“Now, our whole nation is being exterminated in Europe. Why?” he said, appealing to the German Parliament, the Bundestag for additional assistance.

His address on Thursday came after he appealed to the U.S.  Congress for help the previous day in a historic speech. He told U.S. lawmakers „we need you right now” as he invoked tragedies in American history like the attack on Pearl Harbor and the September 11 terrorist attack.

On March 8, the Ukrainian leader who has won international praise for his courage and leadership channeled Winston Churchill as he vowed to fight Russian forces on the land, at sea and in the air. He was given a lengthy standing ovation by MPs both before and after he delivered his remarks.

On Thursday he told the Bundestag he was addressing survivors of World War II who were rescued during the occupation and survived Babyn Yar.

German President Frank Steinmeier visited the site  last year for the 80th anniversary of the tragedy, which was struck by Russian missiles this month.

„It was there that families were killed. Again, 80 years later,” the Ukrainian president added, comparing the current Russian assault to the attacks during World War II.

„You are also behind the wall, a wall that separates you from Ukrainians that are dying in Ukraine with every bomb that is landing on our land,” the president said, evoking imagery of the past Soviet occupation of East Germany and the Berlin Wall.

„We asked you what Ukrainians should do to become a part of NATO, but you kept telling us there was no decision like this on the table, at the table, like there was no chair for us, and now you’re still waiting, and delaying Ukraine joining the EU,” he continued, criticizing what he called as a lack of action by the European Union.

Mr. Zelensky also blasted Russia. „They’re just shelling everybody. The theater where hundreds of people hid was blown up yesterday. The maternity hospital was bombed before that. This is happening around the clock. They’re not letting any aid into the city of Mariupol … they’re not allowing any chance for the survival for the people.”

Separately, the United Nations Refugee Agency announced that more than 3 million people have fled Ukraine since the invasion. The majority of those refugees have gone to Poland, Romania, Moldova, Hungary and Slovakia.

The population of Ukraine was more than 43 million before the  invasion.