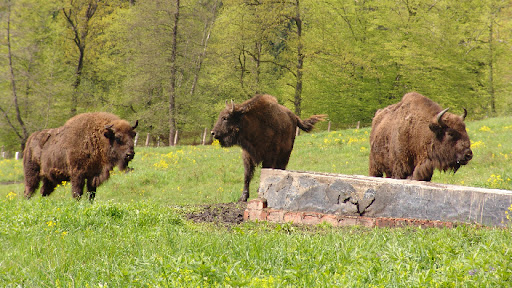 Back after a 200-year-absence, bison who have been resettled in Romania’s Carpathian Mountains shy away from visitors.

The last wild European bison was killed by poachers in 1927, but their reappearance in Romania is key to keeping them off of the critically endangered species lists.

Since 2013, Rewilding Europe and WWF Romania have been working together in the southern Carpathians rewilding area to reintroduce the species.

„There was an urgent need to once again give the bison the chance to live in the wilderness and to mix the genes of those bison from captivity,”  Matei Miculescu, a forest warden responsible for monitoring the Carpathian herd told Euronews Green.

The animals can be hard to spot. In recent years, they have been tempted further into the forest by the abundant vegetation and the possibility of extending their habitat.

Miculescu told Euronews Green the animals are thriving here, in contrast to captivity which „creates the risk of inbreeding” and weakens their chances of survival.

„Around 105 bison now live freely in the Tarcu Mountains and have settled in well,” said Marina Druga. She heads the project led jointly by the WWF and Rewilding Romania.

“The goal is to achieve a population of 250 individuals in five years time.”

After the animals first arrive in the country, they spend several weeks getting used to life in the Romanian wild. Then they are released and left to fend for themselves.

They currently roam over a protected area of over 8,000 hectares. Since 2014, some 38 bison calves have been born in the region.

Miculescu says “the project would have no future,” without the calves. He recognizes each creature by its horns.

Those running the project have resisted giving the calves names, although since they have been born in the wild, all  links with humans should be cut, experts say.