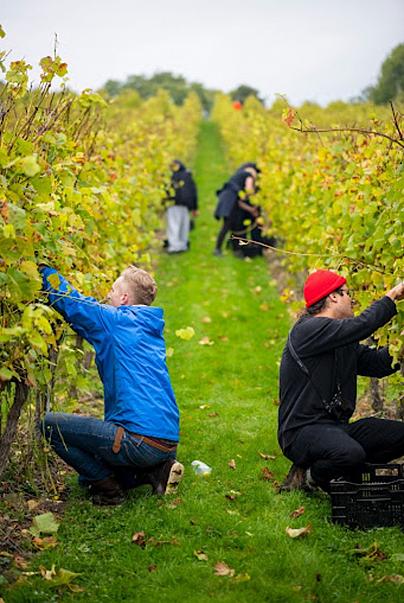 The lack of staff, many of them Romanians, has hit the English wine producing industry hard since Brexit. For the first time winemakers say they have struggled to find enough pickers for harvest.

Covid restrictions have compounded the problem. But there is also a “sizable” reduction in the number of migrant laborers coming to England to pick grapes in the last year, Julia Trustram Eve, head of marketing at trade association WineGB told Euronews.

“It was the perfect storm,” she said . “Inevitably, an awful lot of migrant workers went back because of Covid, but they didn’t return.”

“We simply cannot get the volume of people here to do the work. It’s an absolute nightmare,” he told Euronews.

Romanian seasonal workers made up the bulk of the vine pickers before Brexit. But many have returned home or gone to other EU countries.

Darcy Gander,  the director of Vine-Works, a provider of viticulture and labor services to British vineyards, says his pool of EU skilled laborers, mostly Romanians, has shrunk by  50%, Wine Business International reported.

The labor shortage comes at a bad time.

The English wine industry has flourished in recent years. Almost six million vines have been planted in southern England – enough to produce 18 million bottles- since 2016. This gas led to the creation of thousands of much-needed skilled jobs in rural areas, particularly in management, sales and marketing.

Exports of British wine doubled in 2019 to 550,000 bottles. Brexit permitting, WineGB expects exports to account for 30-40% of the total wine produced in Britain by 2040.

But the dilemma is finding people to pick the vines. Winemakers have been relying on  volunteers some of whom used to work in the hospitality sector.

Some set up schemes where wine enthusiasts could come and pick grapes voluntarily, scheduling it around work or dropping the children off at school.

“All we had to do was give them a very good lunch, a bottle of wine at the end of the day, and pray it does not rain,” said Sugrue, who managed to mobilize nearly 100 volunteers.

He found the scheme “surprisingly efficient and cheap”.

“Brexit has made us realize we have to do something else,” he added.  “We cannot rely on this foreign labor force as we have done for the last 15 years.”

Bob Lindo from Cornwall’s largest vineyard, Camel Valley Lindo opposed Brexit, he is optimistic for the future of British wine.

“Nothing can compensate for us leaving the EU, but people are agile,” he added. “They make do.”