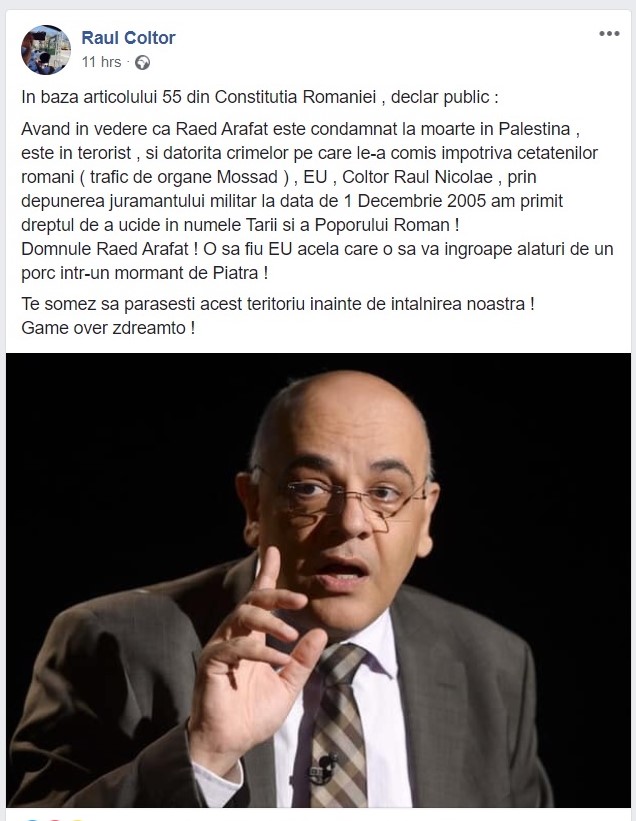 A Romanian government official on the front line of the response to the coronavirus pandemic has filed a criminal complaint after he received two death threats in response to his handling of the health crisis.

Raed Arafat, head of the,Department for Emergency Situations, lodged his complaint with the organized crime unit on Thursday after receiving the threats on social media, which were then widely reported in the Romanian media.

„These are two death threats that have been made public and they seem to be from people who can do harm” he said.

He said he did not know the people who made the threats.

“From here the authorities take over. One (threat) is in a film that has been posted publicly and one through the public posting that everyone knows,” Arafat said as he left the offices of the organized crime unit.

Arafat is an outspoken critic of people who downplay or deny the virus which has sickened 35,003 people and led to 1,971 deaths.

„These really seemed serious and I had to file them (the complaints), because you cannot allow that,” Arafat said.

Police have already begun an investigation after an individual called Raul Coltor who believes the virus is a conspiracy threatened him on Facebook before deleting the post.

„Mr. Raed Arafat, I will be the one to bury you with a pig in a Stone tomb! I am summoning you to leave this territory before our meeting! Game over, scumbag,” the man wrote on Facebook.

Arafat regularly appeals to Romanians to wear face coverings and social distance and warns that the new infections will otherwise escalate.

He has challenged “virus deniers” to visit intensive-care units where seriously ill patients are treated. Commenting on an anti-mask and anti-quarantine protest last weekend, he said: „We’ll see you at hospital.”

Arafat, who is Palestinian, moved to Romania to study medicine during the 1980s.