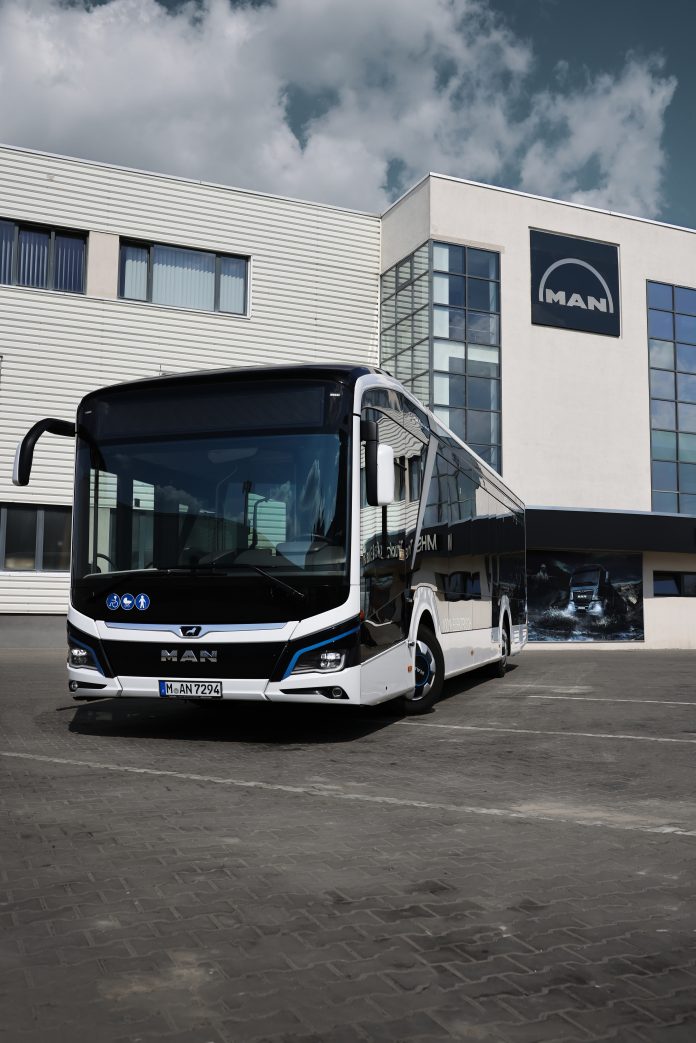 A ‘greener and cleaner’ bus is electrifying Europe: MAN Lion’s City E buses have purred into cities across Europe, and recently entered Romania for the first time.

The company’s European roadshow started last year and is continuing this spring as Europe moves toward a climate-neutral future with net-zero greenhouse gas emissions.

“The launch of this (bus) is an invitation to another lifestyle…(it’s a message). that local authorities must hear,” he said at last week’s launch.

He said he hoped that a private-public collaboration in electric buses would lead to “clean and green” public transport in polluted Romanian cities.

The Transylvanian town of Turda became the first city to run an electric public transport system after it bought 20 e-buses in December 2019.

But MAN is hoping to move its buses into the country’s largest_ and most polluted_ cities.

MAN Lion’s City E is available for testing in  Bucharest, Brasov, Sibiu, Cluj, Oradea and Timisoara from March 31 to April 9.

The Romanian leg of the roadshow started on March 31. The e-bus drove into Sibiu on Monday, an event organized by MAN Truck & Bus SE.

“Romania had to be part of the European roadshow and present the MAN Lion’s City E vehicle, ” said Elena Claudia Iordache, CEO of MHS Truck & Bus which imports MAN buses.

“The vehicle is available for testing in six major Romanian cities…. we are sure that it will impress with its reliability and efficiency, as happened in all the European countries where it has already been tested, ” she added.

“We aim to support municipalities and transportation companies as best we can in achieving zero-emission mobility.”

MAN is demoing the Lion’s City E model which is 12 meters long, and has a battery system containing six units and a capacity of 480 kWh, three electric doors, of which two are automatic. It has LED headlights

It has seating for 35 passengers in the MAN City Advanced, space for people with disabilities, and room for pushchairs and prams.

The environment minister said it was “everyone’s responsibility to take care of the environment. …. Our environmental footprint can be measured very accurately.”

“We all know that in large urban spaces, the transport footprint is extraordinarily large. Over 70% of air pollution in Bucharest comes from traffic.

“At a European level, about 25% of air pollution comes from traffic. In the case of large cities, that rises to  60-75%.

The EU aims to be climate-neutral by 2050 – an economy with net-zero greenhouse gas emissions. This objective is at the heart of the European Green Deal and in line with the EU’s commitment to global climate action under the Paris Agreement.

The European roadshow organized by MAN Truck & Bus, updates on social media under the tag #ElectrifyingEurope: 78 stops, 15 European countries, and 141 customer touchpoints – a successful tally for 2020.

A second round of the roadshow began earlier this year with the aims of  introducing the model into the public transport system so operators can test its efficiency in peak traffic hours.

Transport companies in Luxembourg and Belgium have already bought the buses.

As well as its entry to Romania, it has maiden voyages scheduled for Russia, Italy, Portugal, Lithuania, and elsewhere.

“It’s important to us that as many companies and potential customers as possible get to drive our MAN Lion’s City E in person and experience just how exciting e-mobility can be,” Rudi Kuchta, Head of Business Unit Bus at MAN Truck & Bus said in a press statement.

The Lion’s City E has impressed with its practicality, range, reliability, safety, and comfort, it says. “The Lion’s City E can easily overcome challenging conditions such as temperatures over 35 °C or tricky test routes with steep inclines,” Mr Kuchta said.

The MAN Lion’s City is a range of low-floor and low-entry public buses built by German truck and bus manufacturer MAN Truck & Bus since 1996, primarily for the European market.

The MAN group has been in Romania for 20 years and one of the most successful transport companies.