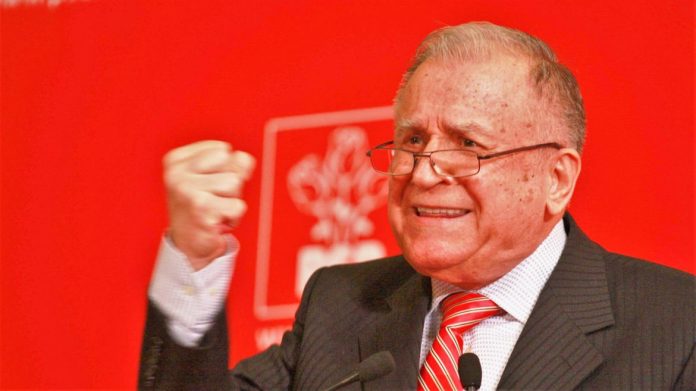 Former Romanian President Ion Iliescu has been removed from the website of the Social Democratic Party, the successor to party he founded 30 years ago.

Up until February, the 90-year-old Iliescu who has been elected president of Romania three times, was officially listed as the party’s honorary president on the party’s website.

Since then his name has been removed. A divisive and controversial figure in Romania, Iliescu is the only president that has ever come from the party ranks, despite it being Romania’s largest party.

Party chairman Marcel Ciolacu explained Monday that Iliescu “was part of the party’s past,” adding he was a symbol for the party and Romanian democracy.

Moscow-educated Iliescu was sidelined by Communist leader Nicolae Ceausescu and reappeared and took power during the uprising where more than 1,100 were killed and Ceausescu and his wife, Elena, were deposed and executed.

Iliescu’s last public appearance was in March 2017 when he appeared at court after he’d been charged for crimes against humanity in the revolution. He denies wrongdoing.

Although he has officially withdrawn from public life, he occasionally makes statements.

He faces the same charges in the June 1990 miners’ rampage where at least six died and more than 1,000 were injured as coal miners randomly beat demonstrators with sticks and pipes.

Iliescu, a former communist, was leader of the National Salvation Front which was established in 1989, which transformed into the Party of Social Democracy in Romania in 1993, and later into the Social Democratic Party, still Romania’s largest party/