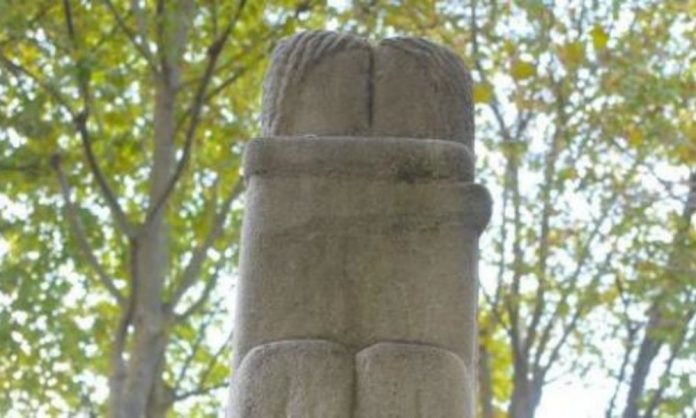 Created in rough stone and worth millions, it’s hardly surprising that The Kiss, a sculpture by Romanian artist Constantin Brancusi is the focus of a bitter legal dispute spanning more than a decade.

The iconic work of art has been on view for more than a century and is one of the top attractions in Paris’s Montparnasse Cemetery.

However, French newspaper Le Monde reported that on December 11 a French court sided with the heirs of the person buried beneath in the tomb on which the sculpture sits, meaning that the family can reclaim the work.

The legal row over the 1909 sculpture, showing two lovers in an embrace in abstract form, is not yet over. When the heirs went to the grave to take away the work in December, they were denied permission by City of Paris, are fighting once more to obtain it, the paper reported.

The marble sculpture had been set atop the grave of Tatiana Rachewskaïa, a Russian student who committed suicide in 1910. Her lover, a Romanian doctor, Solomon Marbais, bought the work from Brancusi and put it on her gave in either 1910 or 1911.

Montparnasse is the second largest cemetery in Paris. Brancusi, who settled in Paris died in 1957 and is buried there.

The Montparnasse version of The Kiss had long been a site of pilgrimage for Brancusi fans and a fixture in the cemetery for thousands of visitors who come each year.

It also became a source of intrigue in 2018, when it was mysteriously covered with a box. The cemetery claimed at the time to not know why it was hidden from public view, though it emerged in 2019, according to a report in L’Express, that the sculpture was subject to a legal claim.

The dispute can be traced back to 2005, when Brancusi’s market began to rapidly expand, after the sale of the Bird in Space (1922–23) at Christie’s auction house in New York. It was sold for  $27 million, the most expensive sculpture ever auctioned publicly.

That same year, six people claimed they owned the rights to the Montparnasse Cemetery version of The Kiss. Dealer Guillaume Duhamel and French auction house Millon began a search to find Tatiana Rachewskaïa’s descendants, whom they eventually located in Ukraine.

In 2006, Mr Duhamel said he would obtain the work from the heirs, sparking fears that it would be sold. The City of Paris declined that request, claiming that it was a cultural monument and was therefore couldn’t be moved.

The current proceedings rest on technical details about the work—whether   The Kiss was designed specifically with the grave in mind, for example. For now, the dealer Duhamel and Millon are trying to prove that they do not mean harm in removing the work. “They must stop presenting us as grave robbers,” Duhamel said.

Brancusi made the first The Kiss in 1907 and he went on making others until 1940. All the Kisses are in rough stone. Not one is polished and not one is platonic.