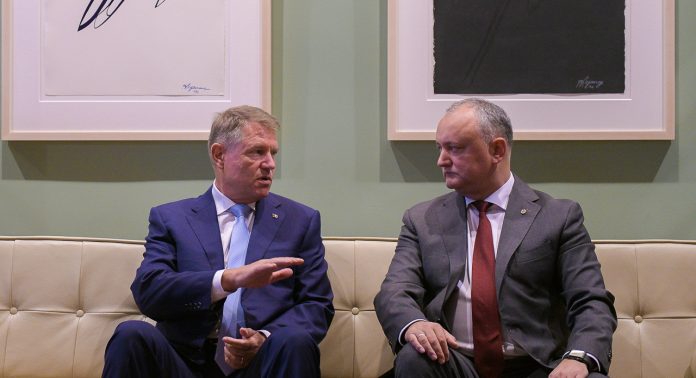 Moldovan elections are often painted as a clear geopolitical battle between the West and Russia.

It’s an easy narrative to understand the complicated political picture and complex history of the former Soviet republic of 3.5 million wedged between European Union member Romania and Ukraine.

The reality is that the impoverished country has orbited between the two for the past 30 years since it declared independence, and has a foot in both camps.

The current administration is pro-Russian and the media is largely Russia friendly.

At the same time, Moldova signed an Association Agreement with the EU in 2014 and two-thirds of Moldovan exports go to the bloc. Most remittances come from Moldovans working in the EU.

It suits Moscow to keep the status quo as Moldova elects a new president on Sunday.

President Igor Dodon, 45, who is running for a second four-year mandate has pinned his campaign on close ties with Russia. Relations with his two neighbors, Romania and Ukraine have been largely neglected.

He is first in a field of eight candidates in an opinion poll, but there is likely to be a runoff on Nov. 14 as no candidate will secure an outright majority.

His main rival is Maia Sandu, 48, who has campaigned on the need for radical reform in law enforcement and the justice system, cleaning up the government and administration of corruption, instituting meritocracy, and creating an investor-friendly environment.

The ex-World Bank economist’s campaign reflected her professional background as a financial-administrative technocrat.

The political reality is that confronting Russia cannot be an election-winning strategy, the Jamestown Foundation reported.

Renato Usatii, who leads the left-wing Our Party is in third place according to the opinion poll. The mayor of Balti in north Moldova, promises offer Moldova the ‘best of both worlds’ and develop good relations with the EU and Russia. He was named  as committing  alleged financial crimes in Russia, but claims the case is the result of political pressures exerted by Mr. Dodon ahead of elections.

Russian President Vladimir Putin last week said he hoped Moldovan voters would back the incumbent noting that their country’s economy, pummeled by the coronavirus outbreak is firmly linked to Russia.

“We see what is happening around Moldova, and know the Moldovan people’s need to both develop democracy and economy,” the Russian president said.

Older and poorer Moldovans support President Igor Dodon while younger voters would prefer a European path for their country.

Moldova’s economy relies in large part on remittances sent by people working abroad but this has caused the working-age population to fall sharply. Most remittances come from EU countries.

Moldova’s GDP is $3,395, a fourth of neighboring Romania’s. The climate is ideal for agriculture, especially vineyards. The wine industry is a major economic sector, exporting 85 percent of output to Poland, Romania, the Czech Republic, Russia and China, according to government data.

He also wanted the Russian government to encourage Russian private capital investments in Moldova and approve a €200 million ($235 million) state credit to Moldova for road construction, but none of this happened.

President Putin received Dodon countless times in Russia from 2016 to 2019, but there have been no bilateral visits this year.