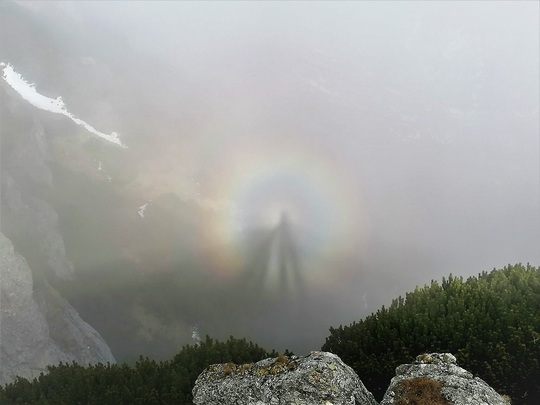 A Romanian forest ranger has captured a rare ‘saint’s halo’ while hiking in the Carpathians.

The ethereal image_ also known as a glory_  taken in the Bucegi National Park was posted on Facebookon Tuesday by the Romsilva National Forest administration.

The picture taken by ranger Valentin Balan shows an enlarged shadow of an observer standing above the clouds with the sun behind them.

The figure’s head is encircled by halo-like rings of colored light forming a ‘glory.’ It’s usually observed on misty days.

One observer called it “a wonderful divine sign from the Bucegi mountains.”

It’s caused by sunlight, or even moonlight, interacting with the tiny water  droplets that compose mist or clouds.

Due to its appearance, the phenomenon is sometimes mistaken for a circular rainbow, but the latter has a much larger diameter and is caused by different physical processes.

In China, the phenomenon is called Buddha’s light (or halo). It is often observed on cloud-shrouded high mountains.