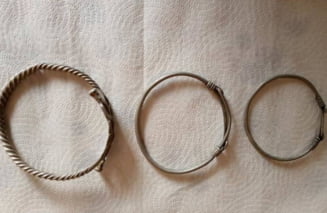 A Romanian man has found three ancient Dacian bracelets with the aid of a metal detector, the latest case of an amateur digging up historic treasure in the east European country.

The silver armlets which date back about 2,000 years century were discovered at the root of a tree in the central county of Brasov.

The bracelets, which have human-like carvings on them, are in an excellent state for their age.

The items will be cleaned and restored and evaluated by specialists. They have been handed over to the County Culture Department, rfi.ro reported.

Florin Boșoteanu, the chair of Association of History Prospectors said the find was the latest discovery by an amateur archaeologist using a metal detector in recent years.

He told RFI that another metal detectorist had found a treasure trove of nearly 1,000 Spanish, Polish, Turkish, and Romanian coins in south Romania.

A dozen Roman coins were found in eastern Romania and another amateur found a cache of more than 47,000 coins which is “the biggest silver monetary treasury in all Romania,” he told the station.

By law, anyone who digs up treasure is eligible to receive 30% of the value and as much as 45% if it is marked as national treasure by experts.

Dacia corresponds to the present-day countries of Romania and Moldova as well as smaller parts of  Bulgarua, Serbia, Poland and Ukraine.

A Dacian Kingdom of variable size existed between 82 BC until the Roman conquest in AD 106.