Romanian prosecutors have detained 10 people on suspicion of trafficking local young women. The women were sent abroad to work as prostitutes.

DIICOT prosecutors said they ordered the detention of the ten for 24 hours. They are being investigated on charges of establishing an organized crime group and pimping for a period of ten years.

The Tulcea Coutr in eastern Romania later ordered the  arrest of the defendants for 30 days pending the investigation.

Prosecutors said that between 2011 and 2021, three crriminal groups were set up which operated in Macin, eastern Romania.

The groups persuaded young women to work abroad as prostitutes and obtained substantial income from the illegal activity.

The three groups made about one million U.S. dollars which they used to purchase luxury homes and cars, DIICOT said in a statement.

Prosecutors carried out 10 home searches in the Macin in which they seized five luxury cars, mobile phones, and  25,000 euros. They also took away a number of documents that were relevant to the investigation. 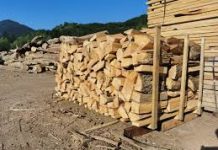