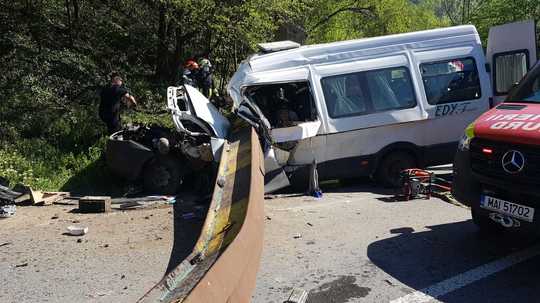 Two people have died and three have been injured after a piece of a railway bridge fell on to the bus they were traveling in.

The incident happened Tuesday morning near the town of Tarcău in northeast Romania as the minibus was passing under the bridge.

Local authorities said that a large truck carrying industrial machinery had passed under the bridge earlier and dislocated a metal bar which then fell on the bus.

The driver and the passenger sitting in the front seat died, authorities said. Two patients were treated for the injuries and one was taken to hospital.

Emergency crews are working to clear the road which remains closed to traffic. The accident happened in a forested area near the city of Piatra Neamt.

Some 1,664 people died in traffic accidents in Romania in 2020, police said in February.

Romania had more fatalities than anywhere else in the European Union in 2019.

The main cause of accidents are undisciplined pedestrians, police say, followed by speed, undisciplined cyclists, failing to give pedestrians priority,  and not respecting overtaking rules.