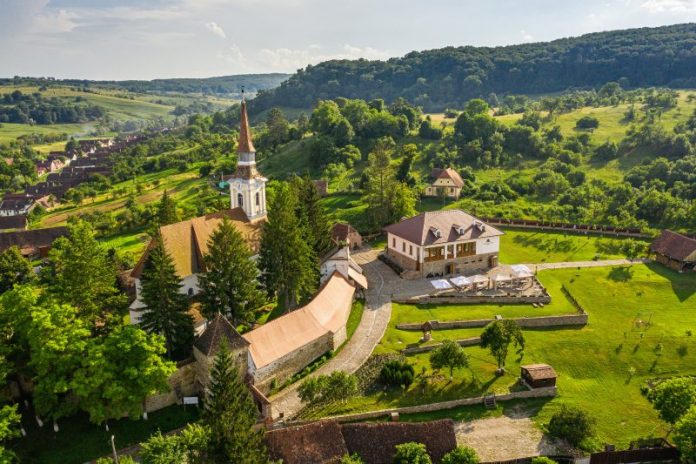 The Haferland annual festival which celebrates traditions in Transylvania’s Saxon villages, from jam making to hay tossing, is back…. in the village.

The festival began in 2012 and is usually held in the last weekend of July. It started off small and now draws several thousand for a weekend of fun.

It showcases the heritage of the Transylvanian villages with their traditions, slow pace of life, and houses that look like they’re from the Grimm brothers’ fairy tales.

This year’s festival headlined “Tradition goes on in the Oat Land” will be held from July 30 to August 1.

It is being organized under the patronage of President Klaus Iohannis, the organizers confirmed on May 28.  It’s an event that encourages and places value on „the cultural, ethnic and historic….riches of Romania which are reflected abroad,” a letter from presidential adviser Andrei Muraru to  co-founder Michael Schmidt said.

Mr. Iohannis himself is a member of Romania’s ethnic Saxon community but as president has not been linked to the festival in the past.

Haferland means Oat Land or Tara Ovazului in Romanian. It starts in Rupea in the east and ends in  Sighisoara in the west, and includes the villages of Archita, Viscri, Homorod, Saschiz,  Rupea, Crit, Bunesti,  Roadesi, Mesendorf and Cloastderf.

It got its name from the oats that were grown there and suited to the harsh climate. Britain’s Prince Charles foundation is in the nearby village of Viscri.

Businessman Michael Schmidt, who’s a native of the village of Criț (German name: Kreuzdorf), a charming hamlet of 676 souls east of Sighisoara and Peter Maffay, a German musician and composer.came up with the idea of the festival nine  years ago.

Mr. Maffay is a Saxon German from Brasov. His family moved to Germany in 1963 where he went on to become one of the best-selling artists there, a sort of German Rod Stewart but with a cool, rock vibe. He’s reportedly sold an amazing 40 million records.

Crit which has a fortified church which is designated national heritage and an organ, is the heart of the festival. The parochial house on the hill next to the church has been repurposed and serves as a boutique hotel Casa Kraus with stunning views over the valley.

There will also be a workshop for social entrepreneurship, design workshops and book launches.

If you’re  visiting a Romanian village, there has to be food. Villagers will sell home-made jam and cakes and food carts will offer beer, sausages and other Saxon food to hungry visitors. “The Haferland week has helped revive the social, economic and cultural life in Oat Land. It’s part of Romania’s tangible and intangible heritage,” the organizers said.

The first festival drew a few hundred visitors, mainly Saxons who were returning home during the summer months. Organizers say about 5,000  visitors come for the weekend events: a mixture of Romanian and foreign tourists, locals, and Saxons back for the summer.

The Financial Times called it the “new Tuscany,” in 2020, though it’s a less manicured version of the Italian province.

The Saxon fortified churches are “messengers of the long gone times, honest stone testimonies of a past that should not be forgotten,” National Geographic said last year in an aerial photo essay which you can find on its Facebook page.

During communism, more than 200,000 Saxons  emigrated to Germany and others were forcibly relocated from the villages to towns under Nicolae Ceausescu’s plans to urbanize the population.

The Saxons first arrived in the 12th century for areas that are today in Luxembourg, Belgium and France. They gained a reputation for being resourceful and skilled craftspeople and farmers who had good relations with the local population and have thrived for centuries.

The largest community of Saxons in Romania is in Mălâncrav which was first attested in 1305 and organized itself around the church. About half the local population of 150 are Saxons.

Details about this year’s festival can be found here.