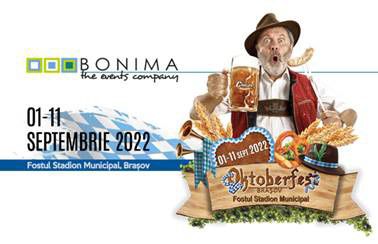 Bavarian-style pork knuckle, pretzels and Miss Oktoberfest are just some of the items that will feature at the 13th Romanian edition of the famous Bavarian beer festival.

The Transylvanian city of Brasov is calling this year’s festivities Lucky 13 or #NorocCu13.

It opens on Sept. 1 and ends on Sept 11  at the former municipal stadium. Brasov known as Kronenstadt which has a local German-speaking population has always hosted the Romanian edition of the festival.

Billed as “biggest party in south Transylvania,” organizers described it as ‘the great re-opening, no restrictions.’

Last year, during the pandemic festival goers needed to show they’d had a Covid vaccine and wear masks.

“There will be good vibes during the 11-day festival.  #And if you  didn’t know, a delicious beer has been  created specially for us, with a higher alcohol content and a combination of flavors to match Romanian and German dishes at the festival.”

Festival goers will be treated to spicy German sausages, cheese, pickles and Bavarian knuckle, Romanian spicy sausages and knuckle will also be on offer as well as the Hungarian kurtos and gingerbread.

This year’s Oktoberfest tent is the largest event tent, decorated in the white and blue of the flag of the state of Bavaria.

White and blue! In the tent, spitting seeds is strictly forbidden! Only  peanuts are allowed. The saying goes: „Beer without nuts, is like brandy without plums”!

A 2.5-meter mascot of Uncle Hans will greet revelers in the Oktoberfest tent, along with competition, contests and many other surprises.

There will be a Miss Oktoberfest competition for the “most sparkling attitude and charming smile.”

Miss Oktoberfest will become the goodwill ambassador and will receive as much Ciucas  beer as much as she can carry and a  Bavarian costume.

There will also be a Miss Heidi, Miss Popularity and King Oktoberfest crown. 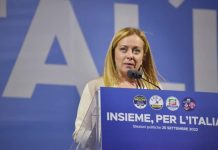 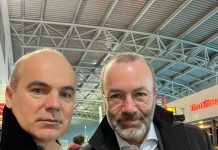