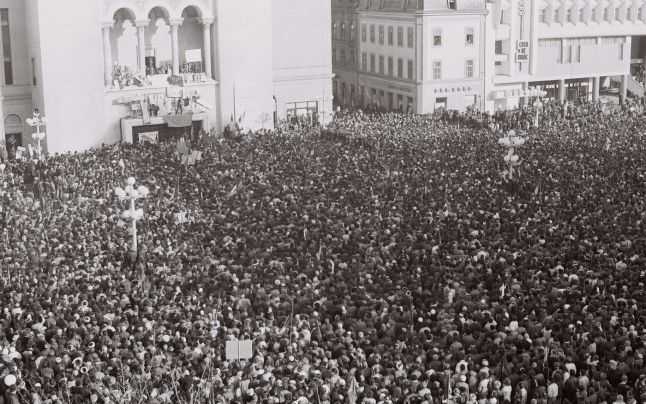 For the past 32 years, air raid sirens have sounded in the Romanian city of Timisoara where the uprising began in December 1989.

Timisoara is the first city to have been liberated from more than 40 years of communism after crowds protested the forced relocation of Hungarian pastor, Laszlo Toekes.

This year there were no civil defense sirens to mark the bloody uprising where 1,100 people died in east Europe’s bloodiest anti-communist revolt.

Revolutionaries who gathered at the Opera balcony to mark the anniversary yelled “Shame on you!” News.ro reported

The balcony is considered one of the symbolic places of  the revolution which toppled Communist dictator Nicolae Ceausescu and his wife, who were executed on Christmas Day.

On December 20, 1989, “This is where we declared Timisoara free from communism and started a general strike, “ Tudorin Burlacu, a key figure of the 1989 revolution told Libertatea on the 30th anniversary.

“We made an appeal for the country to join us,” he added.

The cry went out: “Today in Timisoara, tomorrow in all the country.”

Apparently, the problem wasn’t a snub or forgetfulness, but a technical problem at the Timisoara town hall.

„In the morning when we tested the sound system, it was ok. But at midday something went wrong,” the Timis Inspectorate for Emergency Situations said.

Revolutionaries waited for the sirens, which customarily ring out for three minutes at midday. After they failed to ring on Monday, they withdrew.

A civil defense siren is a siren used to provide an emergency population warning to the general population of approaching danger. It is sometimes sounded again to indicate the danger has passed.