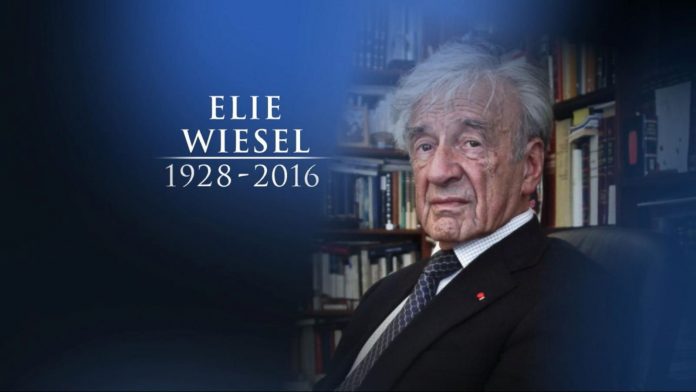 The Washington National Cathedral has unveiled a stone carving of Romanian-born Holocaust survivor and Nobel laureate Elie Wiesel to recognize his legacy as a human rights defender.

Mr. Wiesel and his family were sent to camps at Auschwitz and Buchenwald, where his father, mother and younger sister were killed.

After the camps were liberated, Mr. Wiesel went on to become an author of 57 books, including “Night,” about his experiences during the Holocaust.

Mr. Wiesel, who became a human rights champion and was the founding chairman of the United States Holocaust Museum in Washington, D.C. He was awarded a Nobel Peace Prize, in 1986 and died in 2016 aged 87.

He and his family were among an estimated 14,000 Jews who were deported to the Auschwitz death camp from a town in northwest Romania in May 1944.

Romania deported 150,000 Jews and 25,000 Roma to Nazi concentration camps in a part of the Soviet Union that was controlled by the Axis powers from 1942 to 1944, when the country was run by pro-Nazi dictator Ion Antonescu.

„Elie Wiesel’s life is an extraordinary testimony to the indomitable human spirit and the triumph of love of thy neighbor over hatred and fear, even amidst the darkest and most devastating periods of human history,” said the Very Rev. Randolph Marshall Hollerith, dean of Washington National Cathedral in a press release.

The carving of Mr. Wiesel reflects its mission to be a house of prayer for everyone and a sacred space for the nation to gather, the cathedral said in the news release last week.

It comes during a time of rising anti-Semitism in the United States and around the world, the museum noted.

The bust of Mr. Wiesel took about two years to create, including discussions about whom to honor, followed by making a plaster cast of the subject and then carving his face by hand into stone.

Mr Wiesel’s bust joins other luminaries on the Human Rights Porch which can be seen at the cathedral entrance and is a popular tourist destination.

Among them are Mother Teresa, Rosa Parks and Oscar Romero, the El Salvador archbishop who was assassinated in 1980 while saying Mass.

Stonemason Sean Callahan put the final touches to Mr. Wiesel’s sculpture on April 8. A public dedication of the bust will take place in the fall.

When a bust in Bucharest in 2018, Wiesel’s son Elisha said in a statement that his father didn’t “believe in guilt being passed down the generations,” but he added that Romanians had “a responsibility for what happens now, and for how you raise your children.”

In August 2018, anti-Semitic graffiti appeared outside the house in the town of Sighetu Marmatiei where he was born. One stated that he was  “in hell with Hitler.”